Chinese regulators ordered Jack Ma’s online financial titan Ant Group Co. to return to its roots as a provider of payments services, threatening to throttle growth in its most lucrative businesses of consumer loans and wealth management.

The central bank summoned Ant executives over the weekend and told them to “rectify” the company’s lending, insurance and wealth management services, the People’s Bank of China said in a statement Sunday. While it stopped short of directly asking for a breakup of the company, the central bank stressed that Ant needed to “understand the necessity of overhauling its business” and come up with a timetable as soon as possible.

The series of edicts represent a serious threat to the expansion of Ma’s online finance empire, which has grown rapidly from a PayPal-like operation into a full suite of services over the past 17 years. Before regulators intervened, Ant was poised for a public listing that would have valued it at more than $300 billion, with existing backers including Carlyle Group Inc. and Silver Lake Management LLC. The Hangzhou-based firm now needs to move forward with setting up a separate financial holding company to ensure it has sufficient capital, and protect personal private data, the central bank said.

“This is the culmination of a string of regulations and sets the direction for Ant’s business going forward,” said Zhang Xiaoxi, a Beijing-based analyst at Gavekal Dragonomics. “We haven’t seen clear indication of break-up yet. Ant is a giant player in the world and any breakup needs be to be cautious.”

Authorities also blasted Ant for sub-par corporate governance, disdain toward regulatory requirements, and engaging in regulatory arbitrage. The central bank said Ant used its dominance to exclude rivals, hurting the interests of its hundreds of millions of consumers.

China last week intensified its scrutiny of the twin pillars of billionaire Ma’s internet domain when it also kicked off an investigation into alleged monopolistic practices at Ant affiliate Alibaba Group Holding Ltd. The e-commerce firm’s U.S.-listed shares tumbled the most ever on news of the probe.

The State Administration for Market Regulation dispatched investigators to Alibaba on Thursday and the on-site investigation was completed on the day, according to a Saturday report posted on a news app run by the Zhejiang Daily. The report cited an unnamed official from the local market regulation watchdog in Zhejiang province, where Alibaba is based.

Ant said in a statement on Sunday that it will set up a special team to create proposals and a timetable for an overhaul. It will maintain business operations for users, vowing to keep costs for consumers and financial partners unchanged, while stepping up risk control.

The pressure on Ma is central to a broader effort to curb an increasingly influential internet sphere. The regulators said they will “resolutely” break monopolistic practice and have “zero tolerance” on any illicit financial activities while keeping the global competitiveness of the Chinese fintech firms in the future.

Once hailed as drivers of economic prosperity and symbols of the country’s technological prowess, the empires built by Ma, Tencent Holdings Ltd.’s chairman, “Pony” Ma Huateng, and other tycoons are now under scrutiny after amassing hundreds of millions of users and gaining influence over almost every aspect of daily life in China.

Ma’s own empire is in crisis mode. As of early December, with Ant under regulatory scrutiny, the man most closely identified with the meteoric rise of China Inc. was advised by the government to stay in the country, a person familiar with the matter has said. Alibaba has shed more than $200 billion of market value since November, when regulators torpedoed what would have been a record $35 billion Ant debut.

Alibaba chief executive officer Daniel Zhang said in a meeting with local regulators on Friday that the company will only prosper in the future by complying with the rules, state-backed China News Service reported.

Alibaba said on Monday it would upsize its share buyback to $10 billion from $6 billion. The company’s board authorized the increased program, effective for two years through the end of 2022. It had started buying back shares this quarter.

Ant’s top executives are part of a task force that already has almost daily interactions with watchdogs. Meanwhile, regulators, including the China Banking and Insurance Regulatory Commission, are weighing which businesses Ant should give up control of to contain the risks it poses to the economy, officials with knowledge of the matter have said. They haven’t settled on whether to carve up its different lines of operation, split its online and offline services, or pursue a different path altogether.

“Ant’s growth potential will be capped with the focus back onto its payments services,” said Shujin Chen, the Hong Kong-based head of China financial research at Jefferies Financial Group Inc. “On the mainland, the online payments industry is saturated and Ant’s market share pretty much reached its limit. -Bloomberg 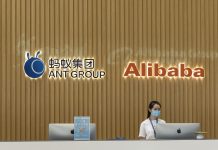