Calling for a political dialogue has become the default option for politicians and pundits every time the security situation in the Valley worsens. The optics of talks looks intended to be a healing touch in itself and ends up becoming a tactic to buy time.

After meeting Prime Minister Narendra Modi in the capital, Jammu and Kashmir Chief Minister Mehbooba Mufti made a statement along expected lines. She called for a resumption of dialogue with separatists in the Valley.

Recalling the dialogue between L.K. Advani and members of the separatist Hurriyat Conference in 2004, Mufti told reporters: “There was dialogue when Atal Bihari Vajpayee was the prime minister and L.K. Advani his deputy. They even held dialogue with the Hurriyat and others. We must start from where Vajpayee ji left. Modi ji has repeatedly said that he would follow the footsteps of Vajpayee ji.”

Calling for a political dialogue has become the default option for politicians and pundits every time the security situation in the Valley turns worse. It is now a well-rehearsed spectacle. As security forces battle anger on the streets, the rhetorical statements follow — blaming Pakistan and calling the Hurriyat Conference irrelevant, lazy, Islamist radicals and unrepresentative. Then the politicians in the Centre and the state go into a huddle in a damage-control mode. And then the call for a political dialogue with all factions in Kashmir, including the Hurriyat, begins.

As the theatre of dialogue unfolds, nobody really has any expectations of dramatic results. The optics of talks looks intended to be a healing touch in itself and ends up becoming a tactic to buy time. It brings about a lull in the unrest and political protests – a respite that both the Kashmiri people and security forces welcome with relief.

Here is a look at the previous dialogue processes the Centre held with Kashmiri voices.

After a tumultuous summer of stone pelting and pellet-blindings last year, BJP’s Yashwant Sinha headed a five-member group in September to assess the ground situation and to bridge the gap between Modi government and the separatist voices in the Valley that gained support after Burhan Wani’s death. His report spoke about the growing alienation and called for a “multi-dimensional dialogue” that includes talks with Hurriyat, improve human rights situation, and allow Kashmiris to revive democratic processes and associations.

The BJP unit in Jammu even criticised Sinha’s report and called it superficial, but the Hurriyat welcomed it.

Then there was the all-party delegation that went to Kashmir. We got visuals of Asaduddin Owaisi and Sitaram Yechuri knocking on separatists’ doors and being turned away.

Even the UPA government appointed interlocutors and went through an extended phase of dialogue with all the stake-holders. This was in response to a summer of street protests and violence in the Valley that Omar Abdullah’s government was struggling to tackle. The report, however, has been collecting dust in the home ministry for years. Recently, in a newspaper column, former home minister P. Chidambaram regretted not acting upon the findings of the report.

Of course, Mufti is not referring to any of these initiatives. The talks that she deliberately chose to recall was held in January 2004 when then deputy prime minister Lal Krishna Advani met the leaders of the Hurriyat Conference for two-and-a-half-hours, and agreed to follow a step by step approach towards a political resolution of the Kashmir impasse. Advani was considered a hardliner, whereas Vajpayee was called an apostle of peace. He had already offered talks in the framework of humanity, or the now-famous phrase “insaniyat ka daayra”.

The meeting in Delhi took place against the backdrop of improved relations with Pakistan after Vajpayee had met General Pervez Musharraf and increasing people to people contact.

The joint statement released by both parties described it as the “first significant step in the dialogue process”. Advani agreed to review cases of people who had been detained and were languishing in jail for long periods in Kashmir, many without charges being framed. They pledged to work toward a durable and honourable solution that will address the concerns of “all communities”, in Kashmir. Participants agreed that the “role of the gun should be replaced by the sound of politics”. The talks were amicable, free, frank and fruitful, said the statement.

Advani showed great sincerity during the talks, Hurriyat member Abbas Ansari had said at that time.

They had decided to meet again in March. They did not. The BJP lost power in May 2004 and there was a new government in Delhi.

Is the call for dialogue a tactic to allow security forces to prepare for what many predict will be a violent summer? Will the Modi government speak to the Hurriyat conference – especially after the storm that erupted when Pakistani envoy Abdul Basit had tea with them? 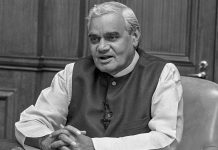