Bengaluru: The night sky this evening (21 December) will witness a historic event — the great conjunction of Jupiter and Saturn for the first time since the year 1623. The two planets, which have moved closer and closer during the course of the past few weeks in the night sky, will appear to merge as one bright object today, before moving apart.

It is the first time a great conjunction — the apparent appearance of the solar system’s two largest planets together in the sky — has occurred in 400 years, and the first time it will be visible clearly after sunset to the naked eye in 800 years.

This planetary conjunction also coincides with the winter solstice in the northern hemisphere, which will see 24 hours of darkness at the North Pole.

Tonight’s conjunction is also the first time humankind will look through a telescope at a great conjunction or obtain a telescopic close-up image of the event, capturing both the gas giants in one frame.

How to see it

Over the past few weeks, Saturn has appeared smaller and fainter than Jupiter, to its side, moving ever closer. Tonight, both planets will appear to fuse as one, visible in the sky like a dim but distorted star. From tomorrow, the planets would move apart again as Jupiter overtakes Saturn in its orbit from our perspective.

The moon appears much higher, to the left of the great conjunction.

The planetary alignment will be visible to the naked eye, even through light pollution in cities, but in a cloudless sky. Through telescopes or binoculars, both planets can be spotted in the same frame in a historic first. Powerful telescopes can capture both the Galilean moons (Jupiter’s four biggest moons: Ganymede, Callisto, Europa, Io) as well as Saturn’s rings.

The conjunction will be visible in most parts of the world, except closer to the South Pole, which will experience the southern hemisphere’s summer solstice or 24 hours of daylight.

Planetary conjunctions are common and can occur with non-adjacent planets as well, as they occur only relative to our perspective from Earth.

Tonight’s great conjunction is the closest the planets have come in recent times in apparent position. Past great conjunctions have occurred with at least a degree of separation in the night sky between the two planets, while tonight’s conjunction takes place with less than one-tenth of a degree separation. This means that both planets can be blocked out by just the nib of a pencil when viewed from Earth this evening.

Such a close planetary conjunction will occur next on 30 January, 2048, with Venus and Saturn in the dawn sky.

Next Jupiter-Saturn conjunction in 2080

The next great conjunction with Jupiter and Saturn will be in the year 2080. The previous one had been in 1623 CE, just after Galileo refined the telescope, but it was too close to the Sun to be observed. The one before that, which could be seen clearly in the night sky, occurred in 1226 CE.

The great conjunction is not related to the winter solstice even though they fall on the same day this year.

Solstices on Earth occur twice a year, when Earth’s axis is tilted at its maximum towards the Sun. The pole that faces the Sun has its longest day of the year, while the opposite pole has the longest night of the year. 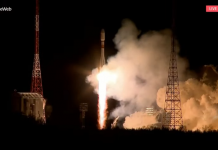 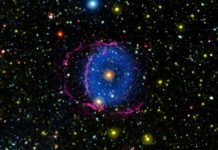 Scientists find explanation for Blue Ring Nebula, a cloud of dust and gas, after 16 years 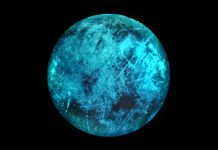 Jupiter’s icy moon Europa can glow in the dark even with no sun, NASA scientists find