Bengaluru: The Geminids meteor shower reaches its maximum or peak tonight — in the intervening night of 13-14 December. The December meteor shower is one of the most consistent and reliable showers, putting on celestial fireworks each year for observers all over the world.

The shower radiates from the Gemini constellation but meteor streaks are visible in all directions and locations in the sky. The streaks often appear tinged yellow.

The shower is thought to be intensifying with each passing year, and observers with clear skies and minimal light pollution can see 120-160 meteors per hour.

The optimal time to view the shower is between 2am and 3am local time.

Unusual source of the shower

The Geminids are one of the handful of meteor showers that are not caused by a comet. They originate from the asteroid 3200 Phaethon, which belongs to a class of asteroids called Apollo asteroids. Phaethon’s orbit makes its approach to the sun closer than any other named asteroid.

As the asteroid moves in its orbit towards the sun, it leaves behind a trail of dust and debris, notably caused by volatile materials evaporating or sublimating because of the sun. These particles are typically the size of a sand grain, and are suspended through the entire orbital path the asteroid takes.

As the earth moves in its orbit and crosses Phaethon’s path, the particles interact with the earth’s atmosphere, burning up and causing the meteor shower. All the meteoroids move parallel to each other but due to viewing perspective, they appear to radiate from a point in the sky.

The Geminids typically peak on 14 December every year, and are visible for about a week after that. Immediately following the Geminids are the Ursids, which put on a slightly less colourful show for a week.

Around the same time next week, on the night of 21 December  — also the winter solstice — the Ursids meteor shower from comet 8P/Tuttle will also peak. Just like the Geminids and all other meteor showers, the optimal viewing time would be 2am to 3am local time. 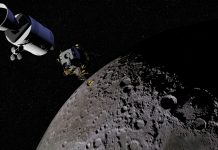