Patna: Political posters that sprung up in Patna Saturday have exposed the rifts within the ruling JD(U) as well in the opposition Rashtriya Janata Dal (RJD).

While the RJD is having to contend with its perennial problem child — Lalu Prasad Yadav’s older son Tej Pratap Yadav — the poster war in the JD(U) has highlighted the fault-lines between party president Rajiv Ranjan Singh alias Lalan Singh, and newly-inducted Union Minister RCP Singh.

It has led to such feverish speculation that Bihar Chief Minister and JD(U) leader Nitish Kumar had to intervene and clarify that there are no differences within his party.

“Some people have the inclination to have their photos on posters. When RCP Singh became Union minister, he himself proposed that Lalan Singh should replace him as the national president of the party,” Kumar told reporters in Patna Monday. “There is no difference within the party. The poster must be a mistake.”

At the heart of the latest JD(U) row was a poster put up to welcome RCP Singh, who is scheduled to be in Patna on 16 August, for the first time since he took charge as a union minister.

The poster, put up outside the JD(U) office in Patna, had the photographs of Nitish Kumar and a dozen other leaders, including an independent minister, but omitted that of Lalan Singh.

By Monday, the poster had been removed.

State JD(U) president Umesh Kushwaha told ThePrint that it was a mistake and that action would be taken against those responsible for it.

Supporters of Union Minister RCP Singh are, however, unrepentant.

“It was a mistake but even in Lalan Singh’s welcome rally (after he was appointed national president), the posters put up had no photo of RCP who was Singh’s predecessor,” said Abhay Kushwaha, an office-bearer of the JD(U)’s youth wing who had put up the poster.

Supporters of the union minister point out that those backing Lalan Singh had put on a massive show of strength on 6 August.

“It was a massive show of money and muscle power that was dominated by one caste. Patna was thrown into anarchy, even air travellers missed their flight,” said an RCP supporter, insisting that they would put on a bigger show on 16 August.

While Chief Minister Nitish Kumar has dismissed any suggestions of a rift, he may have to tackle a massive caste problem in the party.

Ever since its inception, the JD(U) is known as a party of the OBC sections such as the Kurmis and the Kushwahas. RCP Singh, like Nitish Kumar, is a Kurmi.

Lalan Singh, however, is a Bhumihar, an upper caste category that traditionally votes for the BJP.

The rift has now led to speculation in Bihar’s political circles that it may spark an upper caste vs backward caste conflict within the party, one which Nitish Kumar can ill-afford.

“That perception is false. Both Lalan and RCP believe in the leadership of Nitish Kumar,” state JD(U) president Umesh Kushwaha told The Print.

But all eyes are on the welcome that RCP Singh will get when he arrives in Patna, an event that large sections of Kurmis and Kushwahas are expected to participate in.

Also read: Why Nitish replaced RCP Singh as JD(U) president after his induction as Union minister

The RJD is having to contend with its own version of a poster war.

On Saturday, ahead of a youth wing meeting chaired by Tej Pratap Yadav, a poster had appeared in front of the party office in Patna.

It contained photographs of Tej Pratap, Lalu, Rabri, and several other leaders. But missing was that of his younger brother Tejashwi Yadav, whom Lalu has announced as his political successor.

An angry RJD worker blackened the face of one Aakash Yadav, a close confidante of Tej Pratap, on the poster. By Monday, the poster was removed and replaced with one that has the photo of Tejashwi.

But even amid the poster row, Tej Pratap delivered another salvo, attacking his father’s close confidante and state RJD president Jagdanand Singh.

“He operates like Hitler. Party workers are not allowed inside. Nobody holds a post forever,” Tej Pratap had said, leaving RJD leaders red-faced.

Tej Pratap is known to embarrass the party on a regular basis.

Even last month, he had publicly slammed Jagdanand Singh for “ignoring him”. Both, however, played down the row after there was speculation that Singh had resigned.

Tej Pratap is also embroiled in a divorce case and has refused to withdraw his petition despite his father asking him to.

In the 2019 Lok Sabha polls, he had fielded his own candidates in two constituencies.

“While both party leaders and voters have acknowledged Tejashwi as their leader, Tej Pratap ensures that the party faces embarrassing moments. He doesn’t listen to even Laluji,” an RJD leader said.

The BJP, JD(U)’s ally in Bihar, weighed in on the poster wars. “To us, our ally is a party led by Nitish Kumar. As for the RJD, insulting elderly leaders is a part of its culture. A guardian-like leader like Jaganand Singh is being insulted again and again,” party minister Samrat Chaudhary told ThePrint. 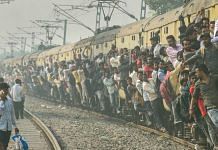 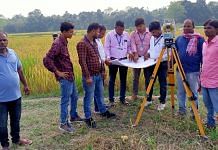 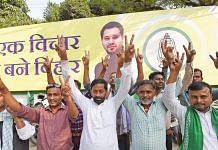