A six-member team of the Coordinating Committee on Manipur Integrity (COCOMI), the apex body of seven CSOs based in Manipur, voiced their concerns about the protection of territorial rights in the state.

Nagas are a sizeable population in Manipur and the worry is about the state’s territorial integrity. The Meiteis (Manipuris) say that the final Naga accord should not hurt Manipur’s interests. The integration of all Naga-inhabited areas has been an essential part of talks between the central government and the National Socialist Council of Nagaland (Isak-Muivah).

Manipur has been wary of the Framework Agreement the NSCN (I-M) leaders signed with the government in August 2015, the contents of which have not yet been revealed despite the apex tribal bodies and civil society urging for transparency.

Speaking to ThePrint after the meeting, Khuraijam Athouba, assistant coordinator at COCOMI, said Shah assured them of not considering granting autonomy to any community in Manipur.

“We had a brief sitting with the home minister for about 20 minutes, and we put our position clear on the territorial integrity of the state. No autonomy for any state or region will be granted is what he assured us. He said he is also working on a formula to resolve all internal contradictions in the state of Manipur,” said a member, who did not wish to be named.

Manipur Chief Minister N. Biren Singh also joined Shah in his private audience with the CSOs. However, no statement has been issued by his office or the BJP on the issues discussed.

A day earlier, at the People’s Convention on Special Status for Manipur organised by COCOMI, a resolution was also adopted against the setting up of any ethnic-based territorial council within the state to “protect the territorial, administrative and emotional integrity of Manipur.”

CM Singh had been invited to Delhi last month to understand Manipur’s position on the peace talks before any agreement is reached between the Government of India, the NSCN(I-M) and the Naga National Political Groups (NNPG), which is an umbrella body of seven Naga insurgent groups.

The meeting was, however, postponed due to byelections in the state.

Negotiations between the Modi government and the NSCN(I-M) continue in New Delhi but have remained inconclusive with both sides maintaining their respective stands over the I-M’s demand for a separate Naga flag and constitution.

A senior member of one of the NSCN outfit that is part of the Naga National Political Group (NNPG) told ThePrint: “It’s high time that Meiteis make it clear that Manipur belongs to them so that we can move out. If the leaders think they own Manipur, it would send wrong signals to the tribals. Nobody wants to break away from Manipur. The Meiteis are enjoying 80 per cent of everything. But 70 per cent of land is occupied by tribal people, only valleys are occupied by Meiteis.”

The state had witnessed massive protests in November last year after the supposed ‘conclusion’ of the Naga peace talks on 31 October between the central government and the NSCN(I-M).

The government had issued a statement dispelling rumours of a breakthrough in talks and said any settlement with the Naga groups would be reached only after consultations with all stakeholders including Manipur, Assam and Arunachal Pradesh.

The COCOMI had then demanded the disclosure of the Naga Framework Agreement signed in August 2015 and then, on 25 November last year, an 18-member delegation met Shah in New Delhi.

The Meitei, Kuki and Naga communities in Manipur used to live in peaceful coexistence after India’s Independence, but a difference in perception of territorial lands and overlapping boundaries has over time gradually disrupted ties.

A six-member delegation of the KIM, which is the apex community organisation of the Kuki tribe in the state, reiterated their longstanding demands — no compromise on the territorial rights of the Kukis in case of a settlement with NSCN(I-M), justice for the victims of the genocide of Kuki villagers between 1992 and 1997, and early settlement of Kuki political demands by expediting tripartite talks.

“We met the home minister and spoke of our stance — no Kuki inhabited areas should be touched in any possible settlement with NSCN (I-M),” Kuki Inpi spokesperson Paolienlal Haokip told ThePrint.

“The home minister reassured (us) of justice to victims of the genocide and said that the Framework Agreement with NSCN (I-M) will not affect Manipur or Kuki inhabited areas,” he added. 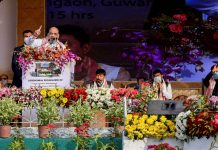 Manipur was known for insurgency, now most militants have joined mainstream — Amit Shah