New Delhi: The Bharatiya Janata Party has kick-started preparations for the next year’s assembly elections in seven states. The party has drawn up a comprehensive strategy for speedy clearance and completion of pending infrastructure projects, foundation stone laying ceremonies by Prime Minister Narendra Modi, and outreach programmes by Union ministers.

The BJP is in power in six of the seven states going to polls, including the politically significant Uttar Pradesh, the country’s most populous state which sends the maximum number of representatives to Parliament.

At a meeting called by BJP President J.P. Nadda Saturday and attended by half a dozen cabinet ministers and other leaders, the party chalked out a strategy for the states going to polls in the first half of 2022 — Uttar Pradesh, Uttarakhand, Punjab, Goa and Manipur.

The 2022 assembly elections are crucial for the saffron party still reeling from election defeat in West Bengal earlier this year.

Sources told ThePrint that Nadda asked the Union ministers about the status of the implementation of the social security schemes and pending infrastructure projects in the poll-bound states.

Nadda also asked the ministers to start spending time in these states.

Another meeting of BJP general secretaries was also held, where ways to build organisational strength of the party in the poll-bound states was discussed.

“Preparation for the assembly elections was the main agenda of this meeting. Union ministers were called in two batches. The first batch included ministers whose ministries’ schemes and infrastructure projects will benefit the states going to polls. The second batch included leaders who will be given extra organisational work in poll-bound states like campaigning. They were told to start preparations,” a senior BJP leader told ThePrint.

The ministers, sources said, were also asked to complete infrastructure projects for inauguration in order to maximise poll prospects of the party.

For instance, in the coastal states of Goa and Gujarat, few projects of the Ministry of Ports, Shipping and Waterways have been delayed due to the pandemic.

Shah and Nadda have sought a timeline from the Union minister for the inauguration of these projects by the Prime Minister, said a party leader. “That is why Mansukh Mandaviya (shipping minister) was called to understand what more can be done,” he said.

The BJP also plans to expedite the process for setting up of textile parks.

During the Budget session this year, the Modi government had announced that seven mega textile parks will be set up over three years along the lines of similar projects in Vietnam and China to increase the size of the textile industry.

“These parks will create huge employment avenues for people and their setting up has to be expedited. At least, the foundation stone can be laid if the state government has acquired some part of land,” the leader explained, adding that these are the development narratives which will help the party in countering the negative sentiments arising from its handling of the Covid-19 pandemic.

He pointed out that the textile cluster in UP is prominent and, therefore, Irani was asked to further hasten the process for the setting up of the textile parks. She will also dedicate her time to campaigning in Punjab and UP, the leader added.

Another BJP leader told ThePrint that the PMO is already tracking timelines for the projects announced during the Budget, but synergy between the party and government is necessary.

“The finance minister was present to give inputs on the Aatmanirbhar Bharat package and if any help is needed to rollout schemes in poll-bound states,” the leader added.

Sources also said that the BJP President has told Union ministers to highlight the central government’s schemes as they tour the poll-bound states.

A BJP general secretary, who did not wish to be named, told ThePrint that there will be a three-tier party structure for the states going to polls next year, similar to Bengal, where campaigning by several ministers and their role in monitoring organisational work helped the party gain ground in the state.

The general secretary added the senior party leaders will tour the states frequently, and inspect and inaugurate infrastructure projects. The major projects, however, will be inaugurated by PM Modi.

Also read: Meeting at Sharad Pawar’s was a gathering of unemployed politicians

PM, Shah to campaign in UP, Hardeep Puri in Punjab

PM Modi, home minister Shah, and Defence Minister Rajanath Singh, who is an MP from Lucknow, will be campaigning in the politically crucial state Uttar Pradesh.

Sources also said the BJP will soon announce “party in-charge for Uttarakhand and Uttar Pradesh” as the party high command is worried about polls in these two states.

Meanwhile, a state executive meeting will be held in Uttarakhand Sunday, where Dushyant Gautam and B.L. Santhosh will be present. 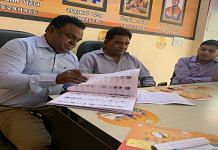