Patna: From exuding confidence to connecting with the electorate and challenging the ruling coalition, Tejashwi Yadav’s campaign for the Bihar assembly election is a far cry from his Lok Sabha one in 2019.

The Rashtriya Janata Dal (RJD) leader is not only drawing bigger crowds than Chief Minister Nitish Kumar and others in the fray, but also setting the agenda for the polls. The three-phase Bihar election will start from 28 October, with the results being declared on 10 November.

The sweeping change in Tejashwi’s tone and tenor has the ruling National Democratic Alliance (NDA), which consists of the Bharatiya Janata Party (BJP) and Janata Dal (United), playing catch up in the state.

Flustered by the impact, the NDA has been scrambling to counter his promise. The BJP, for instance, in its manifesto released Thursday, has promised 19 lakh jobs.

The NDA has also countered with wondering how Tejashwi expects to finance his promise.

“From where will Tejashwi get the money to generate so many jobs? Will he use the money his family has looted,” Chief Minister Nitish Kumar said at a rally in Bhorey assembly segment in Gopalganj district on 20 October while campaigning for party candidate and former IPS officer Sunil Kumar.

Deputy Chief Minister Sushil Kumar Modi went a step further and said that the government is spending over Rs 57,000 crore each year on salaries, while the pension budget is Rs 2.13 lakh crore. “What happens to the development work if he (Yadav) uses the funds to pay salaries of 10 lakh new employees,” Modi said in a statement issued Wednesday.

NDA leaders, however, privately admit that Tejashwi has outsmarted them. “But in Bihar, it’s the social base that matters,” said a BJP leader on the condition of anonymity. “We have a larger social base than Tejashwi’s RJD.”

The NDA hopes that the 12 public speeches to be made by Prime Minister Narendra Modi will swing things in their favour. Modi is to  launch his Bihar campaign Friday with three rallies at Sasaram, Gaya and Bhagalpur.

Also read: There’s a new Tejashwi Yadav in Bihar & he’s doing everything he didn’t do in past 5 years

The chief ministerial candidate of the Mahagathbandhan, Tejashwi’s speeches have now become a dialogue with the crowd. Ahead of the Lok Sabha elections last year, the RJD leader consistently attacked Nitish and Modi without interacting with the crowd, nor raising pertinent issues.

This time, however, Tejashwi is focused on asking pointed questions about the state government’s work in the sectors of health, law and order, and education.

He also often switches to the local dialect — Bhojpuri.

“It is not fair to compare Tejashwi Yadav with his speeches in the Lok Sabha polls,” RJD’s national vice-president Shivanand Tiwari said. “But all of it is a sign of Tejashwi’s growing confidence. He is focused on specific issues and tailors his speech accordingly. He is even better than his father Lalu Prasad.”

Lalu, ever since he came to power in 1990, addressed the backward castes, Muslims and Dalits and reached out to them in his speeches. He not only excluded the upper castes but even mocked them calling them samanti shaktiya (feudal forces). Development and jobs were a non-issue for Lalu.

By the 2010 assembly elections, when Nitish added ‘development’ to the caste formula in Bihar, Lalu was still talking on the same terms. Despite his earthy wit and sarcasm, Lalu’s repartee started to seem stale.

In a break from his father’s politics, Tejashwi avoids speaking about caste conflicts at all. Moreover, he has made it clear that the promise of government jobs will open for the upper castes as well. “Rise above caste and creed to vote for me,” he says in his speeches.

“Lalu is the past, Tejashwi is speaking about the future of Bihar,” said an RJD leader on the condition of anonymity. “During the Lok Sabha polls, Tejashwi was no challenger to Modi. In assembly polls, however, he has emerged as a substantial challenger to Nitish.”

Tejashwi has decided to target the weak spots of the incumbent government. Reminding crowds of Nitish’s demand for special status for Bihar, he asks, ”Will Donald Trump give special status to Bihar?”

He has also promised new industries, a sector where Nitish’s government has severely lagged, and insists that he will tackle rampant corruption.

State party president Jagdanand Singh, a confidante of the Lalu family, said Tejashwi represents the aspirations of the youth of Bihar. “When Lalu came, he had his own agenda of social change,” Singh said.

“But party leadership changes according to the wishes of the people. You can scorn Tejashwi as a Class 9 failure but NDA leaders do not have answers to the questions raised by Tejashwi,” Singh added.

“He represents the aspirations of the youths of Bihar. What is the meaning of education if you cannot provide jobs to the youth. Previously Tejashwi was a campaigner, now he has emerged as a future leader who speaks the language of the common masses.”

According to professor D. M. Diwakar of the Patna-based A.N. Sinha Institute of Social Sciences, Tejashwi is properly pandering to the electorate.

“Tejashwi is speaking the language people desire to hear,” Diwakar said. “Secondly, the NDA leaders have responded by saying that further government employment is not possible because it would hurt development. They fail to realise that even if you have roads and power, people need to have money to pay for using roads and paying for power consumed.” 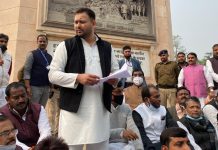 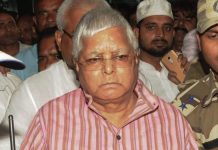