New Delhi: Primetime news Monday remained fixed on the farmers’ protest. Several aspects of the protest were discussed on various channels — from the government’s “tukde-tukde” allegation to the farmers’ health.

Zee News’ Sudhir Chaudhary claimed that this protest could prove to be ‘harmful’ for the health of farmers, while India TV’s Rajat Sharma highlighted the lack of healthcare workers at the protest site.

Anchor Rahul Kanwal wondered, “Where does the truth lie and more importantly where does the farmers’ agitation go from here.”

“Let the government either persuade those who are protesting or ignore them if it wants…why discredit them, why demonise them?…This (the government’s) vocabulary is of a sick minds,” said Congress spokesperson Pawan Khera.

Sanju Verma of the BJP, however, maintained, “Farmers, farm unions are with the Narendra Modi government but there are indeed some tukde-tukde elements who have wanted to hijack the protests.” 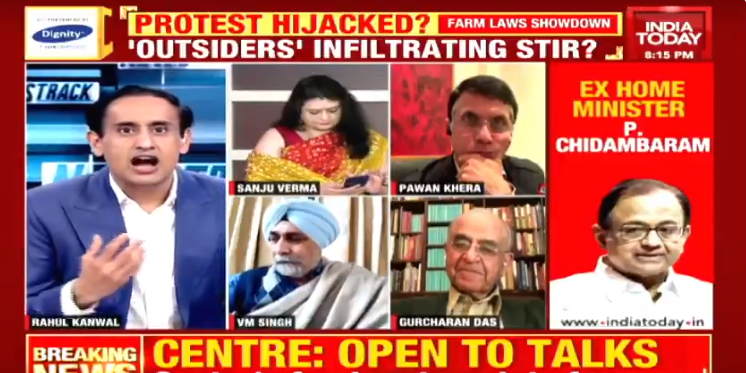 Republic TV made it clear where it stood in this debate as the ticker ‘#NotInFarmersName’ was prominently displayed on the screen.

Anchor Arnab Goswami asked a panelist: “This movement started with the farmers, and now we are seeing that all sorts of people have infiltrated the protests”.

Farmer leader, Baldev Singh Sirsa, however, denied the claim saying, “30 groups from Punjab came together to protest, no political party has reached our stage. We did not let them hijack our movement”.

BJP’s spokesperson Nupur Sharma fired back: “Who are the farmers? Sharjeel, Umar Khalid? What does Yogendra Yadav grow?”

On Zee News, Sudhir Chaudhary noted that it was the nineteenth day of protest by farmers and 15 of them have died so far.

He wondered out loud, “Inn ki zidd logon par bhari toh nahi padegi (Will people be affected by the stubbornness of these farmers)?”

Chaudhary then commented on Delhi Chief Minister Arvind Kejriwal and other AAP leaders who also went on a hunger strike to support farmers. “This fast was held from 8 am to 5 pm. But the true meaning of fasting doesn’t entail just going hungry.”

“Farmers are falling sick in huge number but they are not able to detect the coronavirus,” Sharma revealed.

He said that people needed medicines, however, there was a lack of doctors and people were prescribing antibiotics to themselves.

“Only 20 medical teams deployed in Kundli border, how would they be able to cater to the vast number of protesting farmers,” Sharma wondered.