Rubika Liyaquat on ABP News discussed the “historic” DDC polls. “There has finally been democratic polls in Kashmir, with no pressure,” the anchor said.

Liyaquat then went on to explain the “clarity” that the J&K local polls have brought in. “Some things are clear, BJP is witnessing benefit in the Valley after the revocation of Article 370,” she said, adding that the party is shining in Jammu and Kashmir. BJP won a total of 70 seats in the polls including three seats in Kashmir.

The anchor then slammed the Gupkar alliance — a conglomerate of parties advocating a reinstatement of Article 370 — for saying that they won’t fight the polls initially.

“For the first time, BJP has put its feet in Kashmir, three leaders, including one woman, have won from the party,” Liyaquat said.

“This election has given a sharp reply to those protesting against removal of Pakistani terror and Article 370,” she added.

“BJP is the largest party,” Singh told Kashyap. “We shouldn’t forget that after 70 years, three of our party candidates have won. Nobody thought of the party in the Valley in the past couple of years,” he added.

“I think the votes have come in support of the BJP and PM Modi,” Singh said.

“The voter turnout has been the most this year. The Modi government has done this,” the union minister said.

“This is a new beginning,” Singh added.

Republic’s Arnab Goswami was rather pleased with Prime Minister Modi’s speech at the Aligarh Muslim University Tuesday. Goswami said, “With his unifying speech at the Aligarh Muslim University putting a firm focus on development, the Prime Minister has not just shuttered the wall of religious divides but also in this historic speech demolished the appeasement card used by political parties for the last seven decades.”

On Mirror Now, anchor Tanvi Shukla looked at a scientific paper on health and economic impact of air pollution that was published in the Lancet Planetary Health journal. Shukla said this report revealed some ‘alarming facts’.

She said, “Usually, our conversations on air pollution are restricted to the pollution in the national capital…Do you know, as per this study there have been 10.67 lakh deaths because of air pollution in India.”

“Here’s the other jarring cost, the economic cost. Over Rs 2,70,000 crore of economic loss has occurred due to pollution,” she added.

Shukla questioned out loud, “How can it still not be a great concern?” Sardesai asked him about Mumbai’s recently imposed night curfew and why it was necessary.

Chahal clarified, “Let me clarify that flights getting banned from the UK today has absolutely nothing to do with the curfew we have imposed. Rather, as far as passengers from the UK are concerned, they will be quarantined in hotels of Mumbai.”

He explained: “But, we have been visiting and inspecting pubs, nightclubs and restaurants quietly. We have found that the SOPs of not more than 50 people gathering was not being followed and were being blatantly violated.” 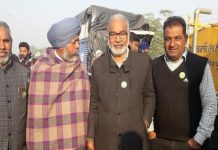