New Delhi: Prime time news Sunday night was preoccupied with the farmers’ protest, which has now entered Day 18. Amid the deadlock with the central government on the three contentious farm bills, a series of interviews with Union ministers and BJP leaders were aired on multiple channels.

“Shots are being fired using the shoulders of innocent farmers to create unrest and a law and order situation in the country. There are people who don’t like or support the slogan ‘Jai Jawan, Jai Kisaan’. The participation of those who are in support of Article 370 in Kashmir and are for the division of India is evidence that the movement is misdirected,” Adityanath said.

“Such a movement in the name and face of farmers cannot be accepted,” he added.

Devgan asked if the movement was “Shaheen Bagh part two”?

“Who was behind Shaheen Bagh? Those who were behind it, everyone knows and they had created a bad situation in Delhi,” Adityanath said.

“I still appeal to those who are part of the movement to hold conversations with the government. Being stubborn will not provide a solution,” he added. 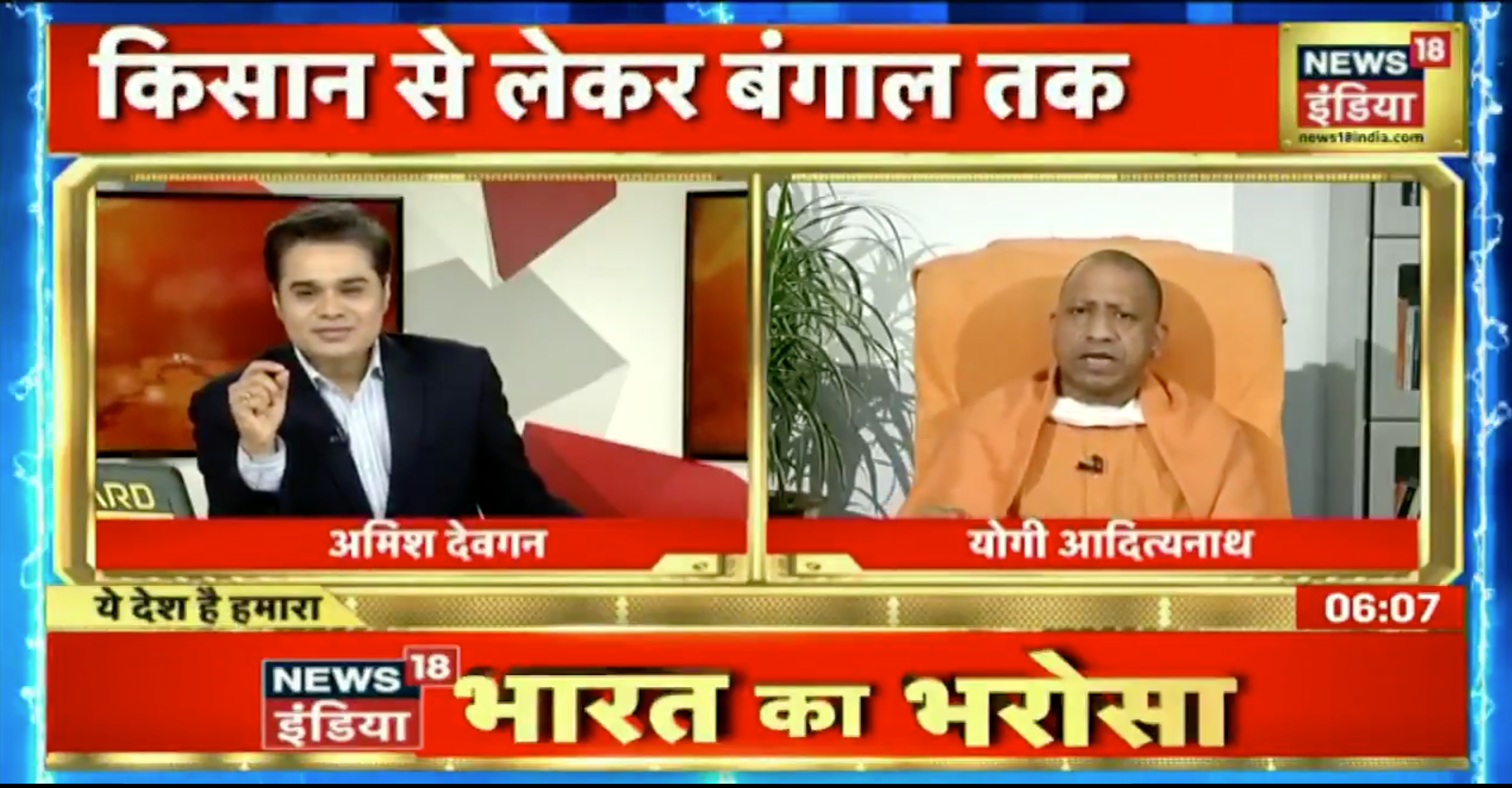 Kumar asked: “Do you think the communication, the olive branches you’re extending now, should have been extended earlier? Was your silence equivalent to arrogance, as seen by the farmers?”

Sitharaman replied, “Not at all! I think in spite of all the engagement each time, whether it is Article 370, CAA, whether it is this…a fair open debate in Parliament exposes the Opposition… they come out without a reply and go to the streets as though Parliament does not exist. It is because they don’t respect Parliament. Their ultimate aim is to destabilise this government.”

She added that the farmers’ demands were not relevant.

“There is a written proof that these protests are asking for things which have just no connection and these are all connections with those Naxal parties,” Sitharaman said.

Aaj Tak anchor Chitra Tripathi spoke to Union minister Som Prakash, who along with Agriculture Minister Narendra Singh Tomar is involved in negotiations with the farmers. “How do you plan on figuring out a middle ground? The farmers have planned a huge hunger strike for Monday,” asked Tripathi.

“We have spoken to the farmer unions five times at length and in a very good atmosphere. We thought when we met on 3 December there was some headway we were making. But it is unfortunate, despite their demands being fulfilled, that farmers are being stubborn. The purpose of the agitation has been achieved, there is no sense in continuing this,” Prakash said.

“All agitations last very long. Even farmers unions agree that the movement has gone beyond their control. They will not turn back unless the laws are repealed. This can result in the movement going south,” he added.

“Prime Minister Manmohan Singh had introduced the same bill, Kapil Sibal had hailed it. But now they are all opposing it. How can political parties behave like this in a democracy? It isn’t good for the country,” said Prakash.

NDTV 24×7 moved away from farmers and anchor Sarah Jacob discussed the new anti-conversion ordinance, which was passed in Uttar Pradesh recently. She asked, “Are new laws emboldening bigots?”

Senior Supreme Court advocate Geeta Luthra explained that inter-faith and inter-caste marriages had been allowed and facilitated through the Special Marriage Act since 1954.

Speaking about the “discriminatory” nature of the new UP law, she said, “An enactment like what the UP government is looking at seems to be in the face of Fundamental Rights and the right to equality. You are obviously treating a woman as a lesser being because if she converts she is being forced to and there is no aspect of equality there.”

She added, “If we are saying men and women are equal, how can then we treat one gender as so feeble, so incompetent, so incapable that they are being forced to convert?”

The panel also featured musicians Krutika Lele and her husband Tamir Khan. Lele said, “There are agendas. There are people who are doing wrong things. But there are also people like us who are living our lives very normally.” 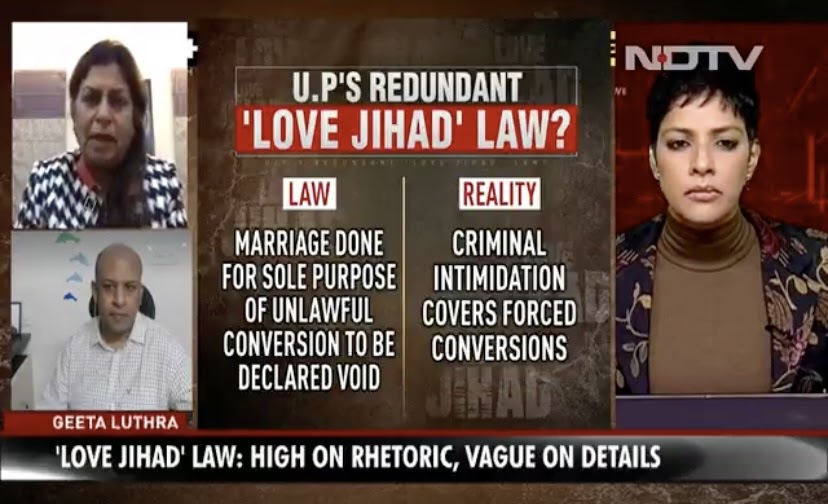