In 'Bravehearts of Bharat: Vignettes from Indian History', Vikram Sampath rediscovers some buried narratives that have been missed out in Indian historiography.

The politico-religious force of the Arabs that had subjugated several countries and peoples across the world was to now make a violent interaction with a living faith that was possibly as old as human civilization itself—India. Historian Ram Gopal Misra states: ‘The early successes of Islam were against religions that had lost their hold on the minds of the people. But in India, the Hindu way of life—symbolized by high moral values of tolerance, truthfulness, and justice—was very much the part and parcel of the vast multitude’s mental and material being.’ Unable to face the persecution of the Arabs, a large group of Persians abandoned their homes towards the end of the seventh century CE to set sail to Gujarat ‘near the site of the later colony of Sanjan.’ They were welcomed and sheltered by the king of Gujarat and they were to become the ethnic community of the Parsis, who are still a thriving group in contemporary India. This innate embracive and inclusive nature of the Hindu faith that allowed every strand of religious opinion, including atheism and agnosticism, as part of the fold made the Indian society that Islam encountered, one that was just, vibrant and adherent to its tenets. As Arab cartographer Muhammad al Idrisi noted: “The Indians are naturally inclined to justice, and never depart from it in their actions. Their good faith, honesty, and fidelity to their engagements are well known, and they are so famous for these qualities that people flock to their country from every side; and hence the country is flourishing and their condition prosperous.”

Like the quote above, several of these chronicles of the invaders themselves, their historians and the early Arab travellers clearly reveal that quite unlike the popular myth about the decadence in the social and moral values of Indian society being the cause of her subjugation by foreign powers, it was these invasions that resulted in this decline.

But the inherent nature of the eternal moral values is what sustained Indian society for the next five centuries of Islamic rule and two centuries of British subjugation.

A little over a decade before the ascendancy of Lalitaditya to the throne of Kashmir, calamity struck the province of Sindh. Ruled by a Brahmin family founded by Chacha Rai, it had valorously repelled the repeated Arab onslaughts, mounted under the reign of several Umayyad Caliphs. Arab invasions of India, at Thane (636 CE), Bharuch (643 CE) and Debal in Sindh (643 CE) were all valiantly repulsed.

During the Debal expedition, the leader of the Arab army, al-Mughirah was defeated and killed by Chacha. So jolted were the Arabs by this crushing defeat that any successive plans made to the Caliph to attack India were always met with apprehension and never got a sanction. During the Caliphate of Mu’awiya ibn Abi Sufyan (r. 661–80 CE), the Arabs made as many as six determined efforts to conquer Kikan, a frontier post of Sindh but failed miserably each time.

However, a good pretext for a final kill offered itself. Some ships that were conveying male and female Muslim pilgrims from Ceylon withvaluable gifts of jewels and pearls from the king of Ceylon to Caliph Al-Walid I who ruled in Baghdad, by way of the Persian Gulf, were compelled by the adverse winds to go to Debal (about 60 km from today’s Karachi), a seaport town of Sindh situated on the western bank of the Indus. Hsuan-Tsang, too, had mentioned that the Indus delta was infested with robbers and sea pirates who often created hurdles in the sea trade routes. On coming to know about this ship carrying precious gifts, the pirates attacked it, plundered the wealth and took all passengers hostage. Raja Dahar, the son of Chacha, who was in power, pleaded his inability to the Arabs to overpower the pirates. ‘That is the work of a band of robbers,’ claimed Dahar, ‘They do not even care for us.’

One of the Caliph’s most notable governors Al-Hajjaj ibn Yusuf induced him to declare a holy war (jihad) against Sindh to avenge this act. Budail was sent to attack Sindh, but his armies were routed and he too was killed by Dahar’s son Jayasimha (Jaisiah). The Arab
Empire that had successfully vanquished so many super powers was being routed repeatedly in India and this shook the Caliph. He was indignant at Hajjaj for these misadventures, but the latter made it a prestige issue to win this expedition at any cost.
Accordingly, Hajjaj’s son-in-law Mohammad-bin-Qasim was sent to conquer Sindh in 710 CE with 6,000 men from Sham (Syria) joining him, along with battering rams and catapults to assail fortified towns. In addition, were: “. . . six thousand armed camel-riders, thoroughly equipped for military operations, with a baggage train of three thousand Bactrian camels . . . in Makran, Muhammad Kasim was joined by the Governor, Muhammad Harun, with other reinforcements; and five catapults (manjaniks), together with the necessary ammunition, were transported by sea to Debal. The number of men conveyed by the naval squadron may be estimated by the fact, that we find one catapult alone requiring no less than five hundred men to work it.”

Before reaching Sindh via the Bolan Pass, Qasim had to face stiff resistance from the Turk Shahi rulers and Kashmir’s Chandrapida. Qasim, however, managed to reach Sindh and attack the Debal port. The town was surrounded by a large fort at the centre of which was a towering stupa of about 120 yards. The Chachanama that chronicles the exploits of the Sindh royal family of Chacha and Dahar states that the stupa was surmounted by so large a flag that when the wind blew it used to fly all over the town and touched the turrets of the fort wall. The belief was that the stupa had a magical talisman in it and if it stood and the flag fluttered, Debal would never fall to any conqueror. An insider, however, turned treacherous and informed Qasim about this secret and hence the stupa and the flag became the first target of his battering artillery. Debal fell to the invaders on the ninth day of the conquest. The conquerors gave their first lessons of a bloody conquest to the Hindu and Buddhist population of Debal by massacring the entire male population of the town in a gory blood bath.

Women were taken as slaves and the town was pillaged. As historian Chintaman Vinayak Vaidya states: ‘700 beautiful females under the protection of Buddha who were of course made slaves.’ Debal was largely Buddhist, as was its governor whom the Chachanama names as Jahin Budh and he ran to take shelter under Dahar’s son Jayasimha (Jaisiah). 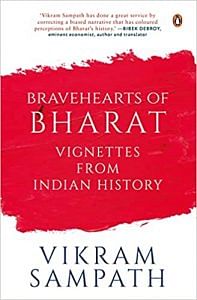 This excerpt from Vikram Sampath’s Bravehearts of Bharat: Vignettes from Indian History has been published with permission from Penguin India.