Indian IT industry attracts more women, but many exit within first 5 years in the job

In 'Women in Science and Technology', Namrata Gupta explains how women in the Indian IT industry are victims of pay gap, career stagnation & other inequalities.

Women’s participation in IT is higher both in comparison to other sectors in the country, and in comparison to representation in the sector in other countries. The increase in numbers of women in engineering education and the mushrooming of several private engineering colleges since the 1990s catered to a growth in demand for engineers in the IT industry. IT–BPM is the largest private sector employer— delivering 3.7 million jobs; this industry is contributing about 7.9 per cent of GDP at present—compared to 1.2 per cent in 1999–2000 (IT & ITES 2005–2006, 2018).

This participation in IT is also higher in comparison to the participation in the sector in other countries. For instance, in 2014, women held about one-fourth of all computing occupations in the USA, although they make up more than half of the US workforce (Women’s Bureau 2015). The percentage of computing occupations held by women has been declining in the USA since 1991, when it reached a high of 36 per cent (Ashcraft, McLain and Eger 2016).

The growth of women in the IT sector is aided by the fact that computers enjoy a woman-friendly image and fit into the overall gendered sociocultural context. As mentioned earlier, specialization in computers is suitable for women (Parikh and Sukhatme 2004); the jobs associated with computers are considered ‘safe’ for women (Varma 2010) and offer a career in software which commands the highest social approval (Bagchi 1999). A woman being skilled in computers is not regarded as abnormal, which is also reflected through cinema. According to Pal (2010: 7), in the South Indian films, ‘we see a burst of female software engineers on screen’ including films with a reversal of roles, with the female lead being an accomplished technologist and the male lead as professionally subservient.

The sociocultural context of the fillip in women’s participation is supported by organizational context of the IT professions. The IT sector offers white-collar jobs with comparatively high salary, easy international mobility, gender-neutral policy based on knowledge-centric skills’ possession, flexible work routine and physically less demanding work process in comfortable indoor work environment (Kumar 2001; Shanker 2008; Upadhya 2006). Some other factors that have led to this trend include transportation, parental leave, anti-harassment, health care and an emphasis on recognizing and supporting women’s needs (especially mothers; Raghuram et al. 2017). In 2012, only 22 per cent of the companies had more than 20 per cent women at senior level; by 2015, the number of such firms had increased to 33 per cent (Raghuram et al. 2017). The number of companies achieving 30 per cent at the C-Suite level has been increasing at 2 per cent a year from 2012 (NASSCOM 2018).

Around 2006, the Indian infotech industry then faced with talent shortage launched initiatives to attract more women into the workforce. IT industry, a relatively new industry (about 30 years old at present), was unencumbered by a traditional masculine culture. It has been the first to recognize the significance of diversity and inclusion (D&I) of which gender has been a major component. It is seen as business imperative, particularly since they operate in a highly competitive environment and talent acquisition and its retention is important; diversity is seen as key to innovation (Buddhapriya 2013). Wipro Technologies launched its Women of Wipro (WoW) initiative, as part of the Wipro Diversity Council, in 2008. The objectives of WoW are to reduce the attrition of women employees, facilitate increased numbers of women managers at a senior level and develop Wipro as an equal opportunity employer with world-class practices to nurture women employees. Infosys has several programmes for gender diversity. It won the first NASSCOM-India Today Award for Gender Inclusivity in 2007 and American society for training and development award in 2009 (Buddhapriya 2013). Meenu Bhambhani, head of corporate social responsibility with Mphasis, now a Hewlett-Packard unit (Duttagupta 2010), says:

The Indian IT industry is definitely ahead on the issue of respecting diversity and goes much beyond lip-service or tokenism. Diversity policies focus not only on granting certain entitlements but also on creating support systems that lead to a level-playing field.

Diversity has been recognized as a good business proposition as well. NASSCOM points out that corporations with at least 10 per cent women on company boards have 2.5–5 per cent higher returns on equity, firms where women are at least 30 per cent of C-Suite have 15 per cent higher profitability than others (Raghuram et al. 2017).

However, the IT sector exhibits a mixed picture in terms of a gendered environment. The gender diversity initiatives of the firms helped to enhance the representation of women in the workforce. By 2011, HCL, Wipro and Infosys had about one-fourth to one-third women workforce, but few in leadership positions. At Infosys, for instance, only 4.8 per cent were at senior management level (Buddhapriya 2013).

At present, although representation of women in the IT workforce is roughly commensurate with percentage representation enrolled in bachelors in engineering (about 28%), it is less than those enrolled in bachelors in computer-related branches (COE, IT, ECE, computer applications) where women’s representation is about 40 per cent (as in Chapter 2). This suggests attrition and/or change of sector of employment. As per one source, percentage of women engineers unemployed is as high as 40 per cent. Although there is unemployment among men engineers also, experts believe that more women than men engineers are unemployed (Parikh and Sukhatme 2004).

Further, there is gender pay gap at all levels, lowest for 3–5 years’ experience level and highest for 6–10 years of experience, as reported by Monster Salary Index (Monster India 2016: 17–26). Also, there is vertical and horizontal segregation. An analysis indicates that over 51 per cent of entry-level recruits are women; over 25 per cent of women are in managerial positions but <1 per cent are in the top level/C-Suite (Raghuram et al. 2017). Thus, there is stagnation at entry and middle-career levels and the gender gap widens over the years significantly. Among the companies surveyed, 88.5 per cent reported that less than 10 per cent of their C-Suite is female and 80 per cent companies had less than 20 per cent at the senior management levels (NASSCOM 2018). As per the same source, more than 50 per cent companies have stagnated at the same level of women in senior management (4%) in 2017 as in 2012.

In 2006, women constituted 26 per cent of the professionals in the technical segments of the IT industry, which employ a large number of engineers. However, the ratio of males to females is reversed (i.e., 31: 69) in the BPO sector (Gupta 2015), which is mainly a non-technical segment of the IT industry. This is affirmed by a recent survey which found 26 per cent women in engineering roles; that 45 per cent women move out of core engineering jobs after 8 years of experience to marketing, product management or consulting; that more women are in software testing jobs (34:66 as men–women ratio) which are less sought after than hard-core programming roles (men–women ratio at 75:25). This indicates that a growth in numbers of technically trained women does not imply a consecutive decline in gender segregation in the labour market.

There are further evidences of gender inequalities in the profession. A survey found that the years of work experience are almost exactly the same for male and female employees at the different career levels (Raghuram et al. 2017). However, while men and women start their careers in IT companies in India at similar ages, men at senior positions are often younger than women at a similar level. This indicates that women with career breaks or part-time work take longer to move up. Majority of women working in the industry are aged 30 years or below and are usually single (Raghuram et al. 2017). A large proportion of women tend to exit from the industry after the first five years of employment. 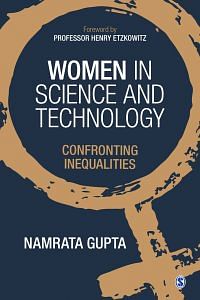 This excerpt from Women in Science and Technology: Confronting Inequalities by Namrata Gupta has been published with permission from Sage Publications.