If cholera, plague, influenza pandemics have taught us anything — don’t celebrate prematurely

In ‘The Age of Pandemics’, Chinmay Tumbe writes that the outcomes of pandemics are strongly influenced by politics — whether the plague or the Spanish Flu.

The Age of Pandemics shows us that pandemics can originate anywhere and at any time. As proven by the most recent cholera pandemic, which originated in Indonesia, there was nothing truly ‘Indian’ about the disease. And yet, in the nineteenth century, it was a widely held belief that British India was the home of cholera or ‘the factory of cholera’, as described by one French delegate at the 1894 International Sanitary Conference. But we now know that the Cholerae vibrio thrived in certain maritime ecosystems and only occasionally found its way to human bowels. Similarly, there was nothing ‘Chinese’ or ‘Indian’ about the plague, and reservoirs for plague foci existed in other parts of the world as well. It was a disease that essentially hurt rodents first, and then humans.

If the 1889–90 influenza pandemic was dubbed the ‘Russian flu’ on the basis of its supposed origin, the more accurate term for the 1918 pandemic would be the ‘American flu’, certainly not the ‘Spanish’ flu. In fact, at different times, influenza earned a variety of names based on its most proximate source. In Japan, it was referred to as ‘American Influenza’, in Ceylon as ‘Bombay Fever’, in Dakar (Senegal) as ‘Brazilian Flu’ and in Northern Rhodesia as ‘White Man’s Flu’. Such labels may appear harmless but have, in the past, led to discrimination against migrants coming from the region where the disease is supposed to have originated.

This is why the WHO, sensibly, does not prefix a disease with a location. The phrase ‘Chinese virus’ for COVID-19, as used by some political leaders, is unwarranted. This is not to rule out the possibility of a country deliberately creating a pandemic in the future through biochemical weapons. In the infamous Unit 731 in north- eastern China in the 1930s, Japanese forces experimented with cholera, plague and other diseases and in 1949, a few of the Japanese soldiers were indicted by the Russians for using bio-weapons against the Chinese during World War II. Curiously, the official name for Unit 731 was Epidemic Prevention and Water Supply Department and its overall efforts backfired spectacularly when the diseases they unleashed killed their own soldiers.

Also read: Why the Mughals stayed away from the Sundarbans

If origin myth-making is the norm during pandemics, so is the idea of the ‘super spreader’. The Age of Pandemics had many of them: pilgrims and soldiers for cholera, traders and tailors for the plague, and postal service officials and army personnel for influenza. The migrant labourer was also frequently abused. In the blame games, identities such as race, caste and religion would invariably crop up as attested in numerous reports littered across the nineteenth century. In the current pandemic, religious congregations came under close scrutiny, first, groups related with the Shincheonji Church of Jesus in South Korea, and then in India, with the Tablighi Jamaat. Both groups attracted outsized blame for weeks, amplified by the media, and exposed classic pandemic fears. This behaviour was reminiscent of the British colonial authorities blaming Hindu and Muslim pilgrims and merchants for spreading diseases a century ago. Fortunately, the blame game stopped in India when some political leaders pointed out that the coronavirus does not consider the religion of the person it attacks.

The long history of pandemics from ancient times till today suggests that there may be no particular pattern to the timing of pandemics. It is true that the Age of Pandemics occurred just as the world was becoming more globalized, but in the past century, with the world more connected than ever before, the real mystery is why pandemics have not affected us to as large an extent as they did in the 100 years before 1920. Mutations of bacteria and viruses are ongoing affairs and their outbreaks cannot be forecast in any meaningful sense. Pandemics can be curtailed, not eradicated.

Also read: In 1918 Flu, towns with Indian officers saw 15% less deaths than those with British officers

The Age of Pandemics tells us that the outcomes of pandemics are strongly influenced by politics. How much a state or government intervenes will be decided by the extent to which it is accountable to its citizens and the magnitude of their resistance. When to intervene will depend on the timing of the next elections or on how much attention the government wants the public to focus on the pandemic. And once the intervention has been chosen, its impact will always be benchmarked to someone doing worse than you.

In the late nineteenth century, this meant that colonial powers would invest heavily in upgrading public health infrastructure in their own backyards but provide endless excuses to avoid doing the same in their colonies. Cholera ceased to have a major impact in most of Europe and North America by the late nineteenth century but continued to ravage territories in Asia. It would be naïve to attribute the burden of pandemics on colonialism per se since the princely states of India or the few non-colonized parts of the world such as Siam or Thailand also suffered immensely during the Age of Pandemics. But colonialism’s link with commerce and the compulsion to keep trade channels open did provide an excuse to look away from pandemic outbreaks. In the few instances of massive interventions, such as with the plague in India in 1896–98, the authorities found such strong resistance that they quickly backtracked and shirked their responsibilities, citing oriental fatalism rather than creating a meaningful engagement with their subjects. The strengthening of democracy over the twentieth century thus played an important role in increasing investments in the health infrastructure of many countries, making them better prepared to face pandemics.

As more countries experience democratic processes and the routine of elections, the timing of intervention in a pandemic has also come to depend on political strategies. If during the 1918 influenza pandemic, few states intervened lest it took attention away from the war effort, today’s interventions can be based on whether elections are around the corner or not. A cross-country study already shows how electoral concerns appear to have influenced the response to COVID-19 in the first few months of 2020. Countries with elections due soon cannot afford to showcase the economic contraction that accompanies a stringent lockdown and act accordingly. Further, pandemic management almost always involves the dispersal of crowds and some curtailment of religious freedoms and civil liberties, which is a political issue, as the British discovered in India in the nineteenth century. Winning the trust of the public while doing so is thus of paramount importance, just as it was eventually enshrined in India’s plague policy after years of misadventure.

Ultimately, the politics of pandemics revolves around showcasing your success. Of lives saved. Of places doing worse than you. Of your timely actions. However, the Age of Pandemics tells us to do no such thing. Premature celebrations came back to haunt the British in India as pandemics tore through the subcontinent. And hence, honest politics, if there is such a thing, should be aware of two fallacies of pandemic management: concerning the number of deaths and regional variation. Close to 12 million deaths due to plague in India in the Age of Pandemics was a disaster, however one looks at it. But zero deaths should not necessarily be seen as a success. 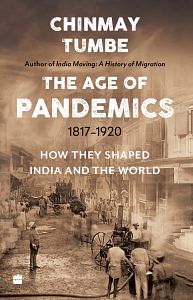 This excerpt from The Age of Pandemics (1870-1920): How They Shaped The World by Chinmay Tumbe has been published with permission from HarperCollinsIndia.