As a teenager, Savarkar tried to destroy a mosque & was sad Hindus weren’t united

In the polarised tinderbox that was Maharashtra in 1890s, Vinakay Damodar Savarkar and his school mates were enraged by attacks on Hindus.

Around this time, communal riots rocked different parts of the Bombay Presidency. The Ganapati festivals and the subsequent processions often invited Muslim ire and led to conflicts. The Muslims quoted their theological texts that prescribed offering their prayers in silence—something that the processional music of the Hindus allegedly disturbed. Trying to deduce which community began a riot was a classic chicken-and-egg problem.

On 6 February 1894, in Yeola, a small weaving centre in the Nashik district, a conflict erupted over a report that a pig’s head had been thrown into a local mosque. On receiving the news, the mamlatdar went to the mosque and found ‘two portions of a dead pig, cut in half, lying in the mosque and its enclosure’. He urged the crowd that had gathered ‘not to attempt any reprisals’. But soon after, news arrived that ‘the Musalmans had retaliated by slaughtering a cow in the Hindu temple’. This led to further rioting and military assistance was sent for. Later in the day, the mamlatdar heard that ‘the Hindus were making arrangements to burn the Juma mosque’. Even as police protection could be arranged, news came in that Muslims ‘had set fire to the Muralidhar temple’. Elsewhere, other mosques and temples were damaged or destroyed. Four people were killed.7

Government officials attributed this spurt in violence to the cow protection movement that had gained ground. It was one of the central tenets of the Arya Samaj founded by Hindu reformer Swami Dayanand Saraswati. Cow protection societies existed in Punjab since 1882. In Bombay, it was around 1887 that the Society for the Preservation of Horned Cattle was formed with modest goals such as construction of gau shalas or cow refuge homes. However, by the 1890s, cow protection societies had spread across a number of Deccan towns including Ahmednagar, Belgaum, Dharwar, Poona, Satara, Nashik and Yeola.

The other reason for the outbreak of clashes between the two communities was the vexed one of Hindu processional music being played in front of mosques. With music being considered taboo in Islam, the Muslim clerics detested the processions that played loud music passing by their places of worship, while the Hindus contested it saying they were using a public space where no one could dictate their actions. As early as 1859, a Bombay Sadr Faujdari Adalat (court) had ruled that music in temples that formed part of religious worship must be respected. However, processional street music, which was not necessarily part of core Hindu religious ritual, should be conceded only when it did not interfere with the liberty of others. Thus:

In the Kesari, Tilak denounced the government for what he alleged as appeasement of the Muslim sentiments when it came to cow slaughter and which had led to these riots all over the Presidency. The processional music issue too bothered him and he decided to retaliate by making the Ganapati festivals grander and more ostentatious than before. The processions were marked by loud shouts of call to arms for the Hindus and to rebel as Shivaji did to overthrow alien power. The festival was organized as a mela movement. A mela consisted of a group of young men or students, dressed in special costumes, armed with sticks, who practised singing, dancing, drilling and fencing. Each mela was attached to a particular Ganapati celebration and would go around the town and the countryside before and during the ten days of the festival. They performed popular verses and songs in which references to current political events were inserted. It is these songs that Muslims objected to and that led to a communally precarious situation.

Also read: Read this before deciding whether Savarkar was a British stooge or strategic nationalist

Vinayak and his friends were absorbing from the Kesari, Pune Vaibhav and other newspapers the stories of these bloody riots and the polarized tinderbox that Maharashtra had become. Each time they heard of the attack on Hindus, they would be enraged and wondered why Hindus could not organize themselves and retaliate instead of suffering repression.

To avenge the riots, Vinayak and his friends planned a secret attack on a mosque in Bhagur that had been left unused for decades. By dusk, the team of boys armed with their little weapons attacked the mosque, broke down parts of it and made a quick escape. When the news reached their Muslim classmates, they were incensed and there was a showdown at school. The ‘Hindu side’ led by Vinayak and armed with their ‘weapons’ managed to trounce the opponents. A truce was thereafter called for, as per which both sides agreed not to bring this to the notice of any teacher. However, a few Muslim boys were seething with rage and sought revenge by vowing to put meat into the Brahmin boy’s mouth.

While these incidents could be dismissed as childish squabbles, Vinayak acknowledges in his memoirs that these experiences taught him how poorly organized and disunited the Hindu community was and how easy it was to subjugate them. The Hindus were perpetually divided among themselves along several fault lines, especially caste, and this made them doubly vulnerable to attacks. They were full of self-doubt and suspicion about the other, and seldom committed to the ‘cause’. Vinayak decided to establish a ‘military training school’ of sorts to instil a sense of discipline, rigour and commitment among his group.

The boys divided themselves into groups—some of them played the role of Hindus, while others were either Muslims or the British. Neem seeds were used as mock bullets. Those who were unafraid of the attack of the neem seeds and managed to grab the saffron Hindu flag or bhagwa from the middle of the field while also stealing the opponent’s arms was declared the winner. Almost always it was Vinayak who headed the Hindu side and steered them to victory. If ever the Muslim or British side seemed to win, he would diplomatically urge them (after all they were only play-acting) to accept defeat for the larger ‘national interest’. After all, in their skit, the Hindus could never lose. The boys would sing victory songs and parade all through Bhagur after these games. 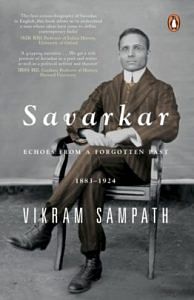 This excerpt from Savarkar by Vikram Sampath has been published with permission from Penguin Random House India.