If last week, it was sympathy and tea, breakfast and lunch at the farmers’ protests just outside Delhi, this week is about the perfidy of Opposition political parties exploiting the controversial farm laws – although India Today did a delightful story about dry fruits being ground into sherbet at a protest site, and Zee News was fascinated by the farmers’ trolley ‘homes’.

While they remain sympathetic towards the farmers, news channels have swiveled around to the government’s point of view. No sooner had Prime Minister Narendra Modi accused the Opposition of politicising the ‘kisan andolan’ last week, they too began to see opposition leaders as the evil genius behind the protests — photos of Rahul Gandhi, Sharad Pawar, Akhilesh Yadav and Mamata Banerjee featured prominently in this rogues’ gallery.

Also read: Modi’s boat ride got the coverage, but on TV, kisan won the sympathy vote

Navika Kumar said the Opposition had taken a “wrong turn…(their) glaring duplicity… was unacceptable”, citing a Sharad Pawar letter and the Congress 2019 Lok Sabha manifesto as proof of their “double standards” (Times Now). Ravish Kumar pointed to a speech by former finance minister, the late Arun Jaitely, as evidence of the Bharatiya Janata Party’s (BJP) volte face too, but never mind…(NDTV India).

Republic TV’s Arnab Goswami made up words as he raved against the Opposition for “parasiting on the farmers” and pivoting “180 degrees” on their own statements. Sreenivasan Jain wondered if there was a “sense of opportunism” about the Congress’ support for the farmers (NDTV 24×7) and Rajat Sharma said the Opposition had parachuted into the agitation (India News).

Also read: TV channels spent the week teaching viewers how to wear a mask and what ‘love-jihad’ is

The BJP, helpfully, provided the news channels with more ammunition, at regular intervals, offering interviews with Union ministers and chief ministers who would roundly condemn the Opposition’s ‘exploitation’ of the farmers’ protests and plant the seed of suspicion that the Opposition, aka  ‘tukde-tukde gang’ is anti-development or a threat to the nation.

As the Opposition became the target of the BJP and news TV, the farmers were often left out in the cold of Delhi’s winter.

‘Kejriwal vs Centre’ was back

There were also some politicians who played into the hands of the government and the news channels. Delhi Chief Minister Arvind Kejriwal decided to play ‘hero-victim’ of the day on Tuesday. Even before the Bharat Bandh began at the appointed hour of 11 am, Kejriwal and his Aam Aadmi Party declared that he was under ‘house arrest’ and no matter how many times the Delhi Police rubbished the charge, they continued to insist that ‘no-one-could-go-in-and-no-one-could-go-out’ of his residence.

News channels were only too happy to make ‘Kejriwal vs Centre’ (India Today) the centerpiece of their Tuesday coverage, diverting attention from the nationwide strike beyond the 3 pm deadline when the “chakka jam” officially ended to the controversy (India Today, CNN News 18, Republic, Times Now).

By Tuesday evening, news went one step further with headlines featuring Delhi BJP MP Meenakshi Lekhi’s claim that those at the protest sites were actually not farmers, but middlemen and politicians — Bharat Bandh, she added, had been called by the Opposition. Now, the farmers had been dispossessed of their own protest.

It was “entirely political now”, said a Times Now anchor. The Bharat Bandh was shown across news channels but they appeared intent on sniffing out Opposition parties and went to great lengths to find them: in Varanasi, Republic TV discovered roads blocked by Congress workers who had the temerity to carry Congress flags. In Kolkata, it was the Left that held processions (News 18 India), in Patna the Rashtriya Janata Dal was leading the way — “definitely, politics is being played – they are trying to gain as much mileage as they can…” said Times Now as images of burning tyres appeared on the screen. India TV discovered shopkeepers in Bhilwara, Rajasthan who spurned Congress leaders’ call to shut shop, shooing them away with chants of ‘Modi, Modi, Modi…’

After the farmers rejected the Centre’s peace offerings Wednesday, CNN News 18 anchor Anand Narasimhan was almost irritated with them: “Who is pushing the farmers?” he asked as though the farmers were incapable of pushing ahead on their own. Well, if it wasn’t the Opposition that was leading them astray, there was always the Khalistanis. On Monday came reports of protests abroad against the farm laws. In London, Times Now zeroed in on ‘Khalistani flags’ and News X said “Khalistanis take over protests”. A firsthand account on CNBC 18 said several thousand protesters participated but made no mention of the Khalistani elements. Similarly, reports that Delhi police had “nabbed 5 terrorists” added that they had “Khalistani links” (India Today).

Doubtless, TV news channels will find more Opposition parties, middlemen and Khalistanis at the farmers’ protests in the coming days. 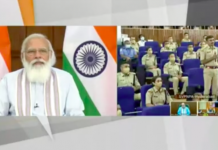 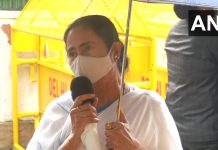 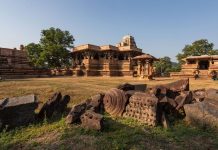