The Bharatiya Janata Party’s IT cell has become like a serpent that eats its own tail. After party leaders Rajnath Singh and Sushma Swaraj, its latest victim is Subramanian Swamy.

The BJP MP Monday tweeted that some members of the “rogue” IT cell have been making “personal attacks” on him through “fake ID”. He didn’t say why, but it’s anybody’s guess — Swamy is the only BJP leader who came out in support of JEE-NEET students demanding the entrance exams to be postponed. When everyone else in the BJP was channeling student anger away from Narendra Modi, Swamy was actively feeding it, calling it a “prestige issue” for the prime minister.

Swamy has asked the BJP to sack the anonymous IT cell members, including their chief Amit Malviya, whom Swamy didn’t consider worthy enough to be addressed by name, referring to him as “one Malviya character” who was “running riot with filth”. At no point did he share any Twitter post as proof of these attacks on him. But Swamy didn’t need to.

: I am ignoring but BJP must sack them. One Malaviya character is running riot with filth. We are a party of maryada purushottam not of Ravan or Dushasan

Anyone on social media who has posted anything critical of the BJP or Prime Minister Narendra Modi in the past few years will attest to Swamy’s claims. Women, Muslims, Christians, Bahujans, secularists, Leftists, liberals, social activists, and journalists who aren’t a mouthpiece of the government have been targeted at some point or the other by the BJP IT cell. Anyone from these groups can tell you how the cell attacks people like a pack of hyenas. This established ‘knowledge’ is Swamy’s defence, it’s why he doesn’t feel the need to give any proof. Everyone believes him because everyone has been in his place.

Also read: Modi is teaching NEET-JEE aspirants what happens when a government becomes too strong

Swamy and the odds of it

Those who won’t agree with Subramanian Swamy — at least not to the point of publicly supporting him — are the ones he doesn’t expect, or even want, support from: the BJP leaders. After all, no one, not even Swamy himself, had spoken up when the IT cell had descended on former external affairs minister Sushma Swaraj for reprimanding a passport office staff who had harassed an interfaith couple in 2018.

I was out of India from 17th to 23rd June 2018. I do not know what happened in my absence. However, I am honoured with some tweets. I am sharing them with you. So I have liked them.

Or when then home minister and current defence minister Rajnath Singh came into the line of fire in 2017 after he spoke favourably about Kashmiris and Kashmiriyat.

The people of Kashmir have strongly condemned the terror attack on Amarnath yatris. It shows the spirit of Kashmiriyat is very much alive.

It seems there’s an unwritten rule in the BJP — don’t publicly acknowledge Frankenstein’s monster because it is only doing its duty. If, at any point, one of the BJP’s own falls prey to its cannibalism, the party and its leaders will suffer quietly in the ‘interest of the nation’.

If Subramanian Swamy is to be believed, the BJP isn’t even responsible for its IT cell going after people on social media. The members, an unidentified, unseen group typing abuses, threats, and lies from unknown places, are an empowered lot who very well understand the power they command. They are only spoken of as a single entity, their bios rarely mention their employer — the BJP. The maximum punishment they receive is Twitter or Facebook suspending their account, which doesn’t require more than a saffron flag and a photo of their god (an aggressive Ram or an angry Hanuman) to come up again and continue things where they had left off.

So, who is responsible then? Swamy wouldn’t say, except calling for the head of the man who seemingly controls the IT cell. But Amit Malviya is only a figurehead, and Swamy wants him punished simply because, this time, he himself has been ‘wronged’. Swamy will stop caring about Malviya the moment his social media ‘warriors’ leave him alone and turn their attention towards, well, anyone else.

Also read: More dislikes than likes for Modi live streams — what stats show and how BJP sees it

Subramanian Swamy finds himself in front of the firing squad for supporting the millions of JEE-NEET aspirants who were hoping, pleading, and protesting for the entrance exams to be postponed at least until November in light of the pandemic.

Swamy not only called for the exams to be delayed, but also offered students his legal acumen on how best to fight their case in court. He became their only hope out of this mess, giving rise to hashtags such as #SWAMYJI_HELPJEENEET. The BJP leader said he would have taken the students’ case up with PM Modi if it were not for seven chief ministers deciding to intervene and filing a plea before the Supreme Court.

Students: Did your advocate argue that policy is assailable before the SC if it is proved to be arbitrary, unreasonable and malafied? Otherwise not. Because I was surprised that SC accepted the Government stand that it is policy decision so it cannot be challenged

Monday is a crucial day.If CMs had not intervened I would have tried to meet PM and take one last chance. I cannot do so now because for Modi, the CMs intervention has made it a prestige https://t.co/PORxIUcjHl it is now CMs and SC’s responsibility to take it to its logical end.

All this makes life difficult for Modi and the BJP — and the Amit Shah-controlled IT cell couldn’t afford that. The organised student power had publicly shamed Modi with the help of just one weapon — the dislike button on YouTube. Swamy’s support fed more firepower to the student protest against the BJP government.

It’s quite telling that the BJP has unleashed on Indian citizens a monster that can’t be controlled even by those who feed it when it turns against its own. The Right-wing ‘influencers’ on social media, who are always ready to push any narrative the BJP wants them to, morph into softer versions of abusive, violent, anonymous IT cell members. They gently remind whichever BJP leader is in the dock that being trolled and attacked is all part of the ‘democratic system’, and that they must refrain from publicly speaking against any IT cell member or the way the group conducts its business.

Swamy may call them ‘fake ID’, but how fake are they if the office of Finance Minister Nirmala Sitharaman and other senior BJP leaders follow them?

But unlike Sushma Swaraj and Rajnath Singh, Subramanian Swamy has his own set of followers — his ‘IT cell’ — who he knows will defend him and speak up on his behalf. After all, it’s a game of how much one side can attack and abuse than the other. Swamy understands this well, which is why he ‘warns’ the BJP leadership to reign in its ‘rogue’ warriors, or else be ready to face the music from his fans.

Swamy also knows he can, at best, tweet a veiled threat. There is nothing he could do beyond energising a set of angry students, or himself making the situation uncomfortable for the Prime Minister’s Office by questioning its economic policies. For other times, Swamy can ensure he is not close to the tail when the serpent turns around to feed on it. 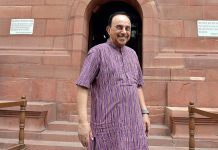 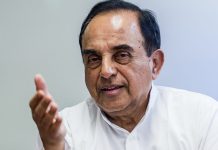