The Essential Commodities (Amendment) Act 2020 may not be so detrimental to the farmers producing surpluses. It is the consumers who may have to worry.

Of the three farm laws that Parliament enacted in September last year, the Essential Commodities (Amendment) Act 2020 is the most business friendly one as it provides relief from one of most stringent laws on foodstuffs.

The Essential Commodities Act 1955 enabled the state governments to impose stock limits and restrict movement of essential commodities. The 2020 Amendment removes restrictions on stocking of certain essential commodities. It provides that the central government can regulate the supply of food stuff only under extraordinary circumstances such as war, famine, exceptional price rise and grave natural calamities. It further specifies that stock limit can only be imposed if there is 50 per cent rise in retail price of non-perishable agricultural foodstuff over the price prevailing in the preceding 12 months or average retail price of last five years, whichever is lower.

The implementation of Essential Commodities (Amendment) Act 2020 and the two other farm laws was stayed until further orders by the Supreme Court vide its order dated 12 January 2021.

What the retail prices tell us

So, what would have happened if the Supreme Court had not stayed the implementation of the Essential Commodities (Amendment) Act 2020? 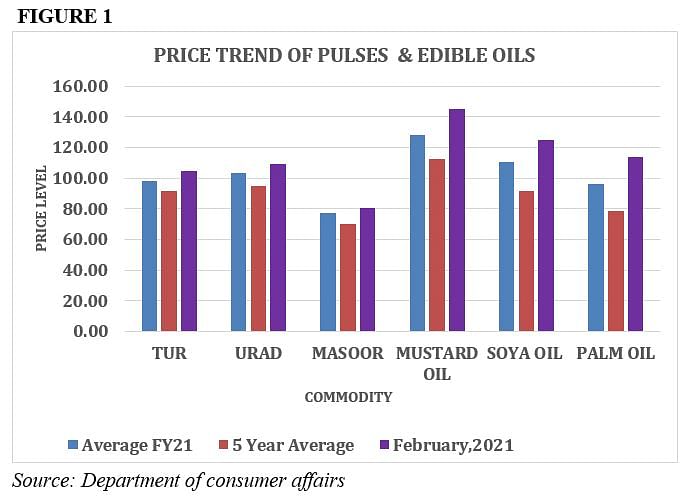 About half of India’s import of crude edible oils is crude palm oil (CPO). According to the data of the department of consumer affairs, the all-India average retail price of palm oil at the end of February 2021 was Rs 114 per kg. The average retail price in the previous five years (March 2016 to February 2021) was Rs 78 per kg while the average price of last one year (March 2020 to February 2021) is Rs 96 per kg. Thus, the price rise of 45 per cent over five-year average retail price is just 5 per cent short of 50 per cent price rise, which would have attracted intervention of the government under the Essential Commodities (Amendment) Act 2020. But before the 50 per cent breach lies a healthy window of making profits — by most stakeholders.

In case of soybean oil, the retail prices rose by only 13 per cent over the average price in the last one year but the rise in the last five years was about 36 per cent (Figure 2). 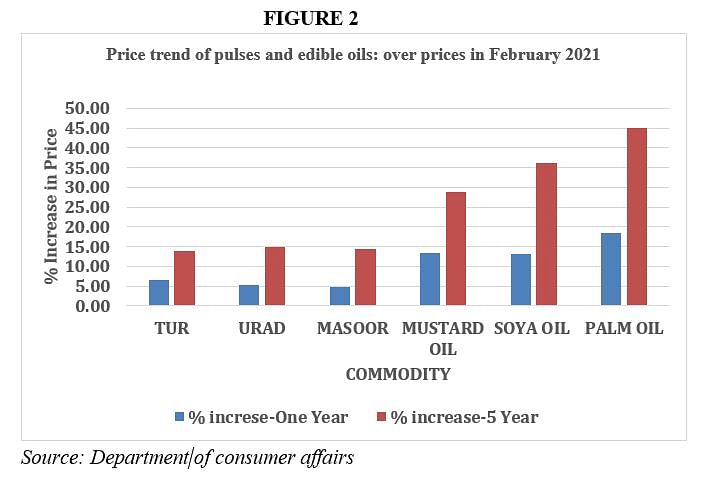 Stocking up and supply chains

Before the enactment of Essential Commodities (Amendment) Act 2020, the businesses were apprehensive of sudden action by the government in the form of stock limits. Many a times, they had only a few days to sell the stock to remain within the stock limits imposed by the state governments under the Act.

If the Essential Commodities (Amendment) Act 2020 stays on the statute books, this risk would be mitigated and the private businesses may stock up the commodities in which India has only marginal surpluses like pulses and oilseeds. While the government would like them to invest in supply chains of perishables, we feel that they are more likely to build up stock of non-perishables as they are of higher value and can be stored for a much longer period. The e-commerce players as well as the corporates having their own retail outlets may find it profitable to invest in the supply chains if they are assured that the government will not bring any stock limits till the condition of 50 per cent price rise is actually met. In the past, the governments have not waited this long before imposing stock limits and taking other measures like ban on export and reduction of import duty etc.

However, the government will still have other options to intervene. For example, the central government can reduce the tariffs, ease quantitative restrictions, dilute phytosanitary norms and even ask its own public sector companies to import. These methods have been employed from time to time in the past and the businesses will still be worried about such actions. The moot question is whether the corporates will give a fair price to farmers when the crop is harvested and prices tend to be the lowest. There is no easy answer to this but the entry of large-sized, organised market participants can bring competition to the small traders who are today the main purchasers of farmers’ produce of such high value non-perishables. If government policies remain stable, private investment in supply chain may be much higher than in the past.

The Essential Commodities (Amendment) Act 2020 may not be so detrimental to the interest of the farmers producing surpluses, and who are net sellers. It is the consumers who may have to worry more if monopolies develop in this business. At present, the government has no way of knowing the quantities of privately held stocks. It can be done by making issuance of electronic-negotiable warehousing receipt (e-NWR) compulsory.