If Ram is the presiding deity of Ayodhya, then its political god is Lal Krishna Advani. Even though Prime Minister Narendra Modi, Home Minister Amit Shah and Uttar Pradesh Chief Minister Yogi Adityanath are lining up for the bhoomi pujan on 5 August.

Actually, a lot of people can claim credit for bringing India to this penultimate step of bhoomi pujan before the grand Ram Mandir is built in Ayodhya — Advani, the Rashtriya Swayamsevak Sangh, the Vishva Hindu Parishad, and the Congress. But, most importantly, Indian families.

Undoubtedly, L.K. Advani not only set the ball rolling but also introduced the new language of Hindutva pride in the early 1990s. He single-handedly dismantled the word ‘secularism’ from India’s aspirational pulpit, and gave it the adjective ‘pseudo’. In every stump speech from the rath, he spoke of the historical Hindu wound and made Babri Masjid a buzzword for hate in Indian living rooms.

But Indian family conversations should also be a big claimant for this credit. They kept chipping away at India’s founding ‘narrative template’. This is why scholars erred early on by locating the so-called ‘idea of India’ in saving the Babri Masjid. That idea wasn’t demolished at a religious site, it was taken apart brick by brick in our living rooms.

Also read: There are 3 claims to Ayodhya — law, memory & faith. It’s not a simple Hindu-Muslim dispute

Many in the Indian liberal commentariat have said that the demolition of the Babri Masjid was the biggest blow to Nehruvian ideals. But to invest an old dilapidated mosque with the burden of secularism and an ‘idea of India’ was never going to fly. First, a religious structure can’t be and shouldn’t be a site to preserve secularism. Second, and more importantly, many Hindus, over generations, had been taught to view the mosque as a site of historical humiliation. They acted as ‘mnemonic communities’ (thick-memory communities) self-identifying as wounded.

And that wound, reminded Arun Shourie, was strewn across India, not just Ayodhya. According to a book that he co-wrote — Hindu Temples: What Happened to Them — which was published much before the demolition in 1990, there are 2,000 mosques that stand on top of demolished temples. The red book listed each of these mosques with name, village and some photographs, and gave intellectual fodder to the Vishva Hindu Parishad’s campaign in the 1990s that said Hindus are ready to give up their claims over these 2,000 mosques if Muslims would give them the Ayodhya, Varanasi and Mathura sites.

I visited a handful of these 2,000 mosque sites back then but found no knowledge, folklore, collective memory, let alone wounds, about demolished temples among local villagers. People did not know or did not care or had just accepted what they had inherited by way of built heritage. Popular memory is constructed through deliberate acts of retelling, which were manifest in Ayodhya, Varanasi and Mathura, but not the 2,000 sites listed in Shourie’s book.

Here is another way collective memory is shaped. When I visited Ayodhya a few years after the mosque’s demolition, I saw street vendors selling little black-and-white flip-books with two dozen picture pages. When you flipped the pages fast, you could see in motion how the Babri Masjid was razed to the ground. The last flip-book I had seen in life was one that showed Kapil Dev’s bowling action in the early 1980s. The Babri flip-book was being sold alongside poster images of Ram, the warrior. There were also books extolling kar sevaks who helped bring the mosque down, sort of like a demolition hall-of-fame. This is how deliberate retelling works. It can keep both wounds and triumphalism alive.

The demolition, however, wasn’t the only, or first, or the last act of vandalism against the unique Indian pluralism that Indira Gandhi called a salad bowl. (Canadians say mosaic, Americans use melting pot to describe diversity). The salad bowl had been regularly chipped away long before 1992 — in deliberate family oral histories and conversations. In families, the idea of the Muslim as the eternal, unforgivable other was kept alive.

Many parents—even today—tell their children to marry anyone but a Muslim (or some version of that). My own father said this. The marigold flower was not allowed in family prayers because it was associated with Muslims. The flower even has a derogatory Tamil name that refers to it as a Turkish flower. The simple act of banishing a flower keeps the popular memory of Muslim invasion alive. In Tamil and Kannada families, you refer to Muslims not as Muslims but as Turks for the same reason. My father routinely talked about how Muslim neighbourhoods in Madurai were growing (‘from ten houses at the corner to the entire street now’), and how Muslim women no longer wore saris like they did in his generation but had moved on to black burqas.

Casual prejudiced observations and references like these are routinely made in many Hindu families about Muslims (to emphasise what Ashutosh Varshney called their ‘everlasting disloyalty’), Christians (over religious conversions) and Dalits (over hygiene). It works the other way too. Many Muslim families also warn their children against marrying a non-Muslim. A converted Pentecostal relative of mine once said to me ‘others won’t be saved’.

The 1992 demolition was no sudden act. All of our family conversations contributed to the pickaxes that hit the mosque in Ayodhya. It is easier to blame politicians for religious bigotry or go to Jantar Mantar with ‘Not In My Name’ placards, but more difficult to look in the mirror and speak up in our families.

There will be visible triumphalism in the bhoomi pujan event this week. First, history was undone and now it will be ‘corrected’. Liberal intelligentsia will mourn and blame politicians and courts. But they will choose to be oblivious to how public history and social memory is constructed. History isn’t just the sum of built heritage structures. It is also made up of intangible collective memories — the stuff that is not allowed to be ‘disremembered’.

A wiser approach for liberals would be to start investing their energies in family oral histories and conversations instead. 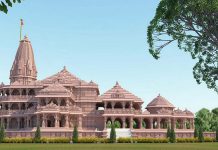