Liberal gang-shaming is a thing now. Just like Hindutva army onslaught has been for some time. The manner in which Bloomsbury India was pressured to withdraw the book titled Delhi Riots 2020: The Untold Story by RSS-sympathetic lawyer Monika Arora, Sonali Chitalkar and Prerna Malhotra is an instance of this. The manner in which big ticket authors like William Dalrymple weighed in makes it clear that liberals and progressives have entered a rabbit hole from which we won’t be able to extricate ourselves easily.

For someone who has always held close the idea that book bans and calls for book bans are inherently fascist acts, this moment of de-platforming of Monika Arora’s book is a deeply conflicting one for me. I intensely disagree with the premise and politics of the book — blame the victim ‘Kapil Mishra style’ — at least from what I gather from social media. But this is when our long-held Voltairean values are tested severely, when books you don’t agree with are denied the space to breathe. I agree it was easier to defend Salman Rushdie than Monika Arora.

I am convinced that the book will find a new home, a new publisher and a new platform. It is inconceivable that under Narendra Modi and Amit Shah’s government, this kind of a book would simply disappear. In fact, it will now become larger-than-life, which it most probably doesn’t deserve.

But my larger point is this — it is not a celebratory chest-thumping moment for liberals, no matter how you twist your arguments with legal sophistry and do all kinds of ideological gymnastics to make your peace with this moment.

Also read: The idea of ‘safe spaces’ has turned on itself to exclude everyone who dares to differ

Can’t do a volte face now

I am not a millennial woke. My politics was shaped in the 1980s, when I was a teenager. That was when Salman Rushdie’s book The Satanic Verses was banned by the Rajiv Gandhi government.

When you ban a book, it acquires a kind of cult status because the market fuels curiosity. That is what happened with other banned books. In fact, there are books chronicling banned books by different regimes in history.

We don’t need Hindutva libraries of Alexandria — let them breathe, be ignored, challenged, die, and be forgotten over the ground.

Also read: ‘This is fascism’ — Flak for Bloomsbury on social media as it withdraws book on Delhi riots

To be clear, I am not elevating Monika Arora’s propaganda to the level of high art and high literature. I am not indulging in false equivalence either, like many of my friends would accuse me of. All I am saying is that forcing Bloomsbury India to withdraw the book is counter-productive – both politically and in the pure sense of how market forces work.

I was against the bringing down of the Confederate statues and colonial statues after George Floyd murder and Black Lives Matter protests, even though the anger was understandable. Instead, if our 21st Century politics of rights does not allow us to tolerate a Confederate statue at the city centre, there are better ways of dealing with it than throwing it in the river. Put it in a museum or erect plaques around it to give it context and history, explaining how it is an anathema today. Shame the statue, instead of erasing it.

This is not how you stop a thought. If you find that WhatsApp narratives are being turned into books, they should be countered with different books. Bloomsbury tweeted that they are running a book called Shaheen Bagh: From a protest to a Movement by Zia us Salam and Uzma Ausaf.

Yes it would be called ‘both-sideism’, a dirty word today. Many would ask, would you advocate freedom of thought and speech under Nazi Germany? The answer to these questions are both easy and complicated. No, I wouldn’t advocate ‘both-sideism’ under Adolf Hitler. That’s the easy answer. But there is a larger nuanced issue at hand here. One of how liberals and progressives are digging themselves into a bottomless hole in today’s politics with a series of self-goals.

But whichever way you answer that question, de-platforming and bans are not the way to go.

To quote Shahab Jafari’s famous Urdu couplet: Tu idhar udhar ki na baat kar, yeh bata ke kaafila kyon luta/mujhe rehjano se gila nahin, teri rahbari pe sawaal hai. (Don’t beat around the bush saying this or that, just tell me how did our caravan get plundered/I have no grudge with the bandits, but am asking questions on your leadership).

Where do you draw the line? Today, many are relieved that this book will not find a publisher in Bloomsbury. But what will you do if Swarajya or OpIndia launches a publishing house of its own in the future?

There were other options liberals could have exercised. They could have questioned Bloomsbury India’s editorial judgement in accepting Monika Arora’s book for publication. That decision was driven by greed and fear probably, as is the one of withdrawal. Liberals could have even boycotted writing for Bloomsbury. But to rejoice the de-platforming is the latest in a long list of liberal self goals, not unique to India. This is happening around the world in the name of freedom of speech and expression. But all good values are tested in adversity and that is where we demonstrate the robustness of that principle.

If you celebrate this moment, it is going to be really difficult to come back from this. If you chest-thump right now, it defeats your politics long term and will be quoted ad nauseam for decades to come and labelled as pseudo. It will just embolden Hindu fundamentalists in India and abroad to justify demands for banning and de-platforming Wendy Doniger, Sheldon Pollock and Isabel Wilkerson. 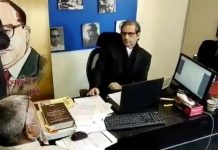 For 14-yr-old Faizan, shot in the back during Delhi riots, it has been a limp back to normalcy