The curious case of the disappearing Twitter bio of Congress social media warrior Divya Spandana (Ramya) sparked frenzied media speculation about her troubles in the party. But after being silent and without a bio for three days on Twitter, she bounced back, blamed a mysterious bug and reposted her old designation.

But Divya Spandana is not Congress president Rahul Gandhi’s Twitter guru, and is no longer part of the core team that suggests ideas for his tweets. Her influence in Rahul Gandhi’s social media universe has been waning incrementally since the past year.

Contrary to popular perception among the media, politicians and Delhi wonks, Spandana hasn’t had a say in Rahul Gandhi’s Twitter account for several months now. She only handles the Congress’ social media account.

Also read: The mysterious disappearance of Divya Spandana and her Twitter bio

As soon as Alva made a quiet entry into Rahul Gandhi’s Twitter team, an awkward WhatsApp episode occurred.

Spandana took it upon herself to start a new WhatsApp group. According to a member who was part of the group, she added Rahul Gandhi, party communication head Randeep Surjewala, Alva among others. She sent an introductory welcome message saying the group had been created to coordinate and brainstorm ideas for Rahul’s tweets.

Alva thanked her but expressed his discomfort with WhatsApp as a medium. He said he will be available on the phone if she wanted to discuss ideas. He then left the group she had formed. Rahul and Surjewala also left the group. Perhaps, Spandana created the group and added Rahul to it without checking with him first. But the exits sent a signal.

Alva is now part of a group close to Rahul that bounces ideas to him for his tweets. Rahul does the tweeting himself, and nothing goes up on his timeline without his approval. Sandeep Singh, a close aide, mostly writes Rahul’s Hindi tweets.

Spandana’s troubles, however, did not start with Alva’s entry, not even after her recent tweet calling Prime Minister Narendra Modi a ‘chor’ (thief). The Twitter gaffes on the Congress’ page – the pictures of Rahul checking out a menu and the photo montage during the Europe trip – were all blamed on Spandana and things went cold with Sam Pitroda.

Her troubles began last year in another exclusive WhatsApp group that included Rahul. There was a public meltdown on the group last fall between Spandana and Surjewala. According to a party’s social media team member, the spat was over information that appeared in the media but wasn’t shared with Spandana first for Twitter posting. In fact, Rahul had himself intervened to put a stop to the argument in the group at that time. Her habit of carrying tales about others to Rahul did not endear her to the Congress members either.

Also read: How many light bulbs does it take to change Rahul Gandhi?

That WhatsApp spat coincided with the new but belated interest Rahul himself took in tweeting. He wanted to make his tweets witty and fun. The media began to take note of a new assertiveness in his timeline. He was getting more retweets and followers. The BJP members said that it was a major bot activity, but Congress social media analysts said his tweets were finding acceptance because of the growing disappointment over Narendra Modi government’s sloppy GST implementation. Congress’ social media posts became the rage ahead of the Gujarat elections with the slogan lampooning the BJP’s vikas claims with the hashtag vikas gando thayo che.

The fawning media ran a series of stories about Spandana bringing the zing factor into Rahul’s tryst with Twitter. Everything Rahul did was credited to her.

In fact, Rahul’s Pidi tweet last October was partly intended to counter this narrative and wrest ownership. It’s another matter that the tweet backfired badly and Rahul’s supporters earned the nickname ‘Pidi’.

Many leaders were surprised that Spandana wasn’t more involved during the elections in Karnataka, her home state. She was just limited to organising a couple of events.

But Spandana continued to handle Rahul’s Facebook and Instagram accounts. However, her critics now say that Rahul’s Facebook page is an unimaginative copy-paste job of his tweets on most days. Instagram, on the other hand, has done better under her. 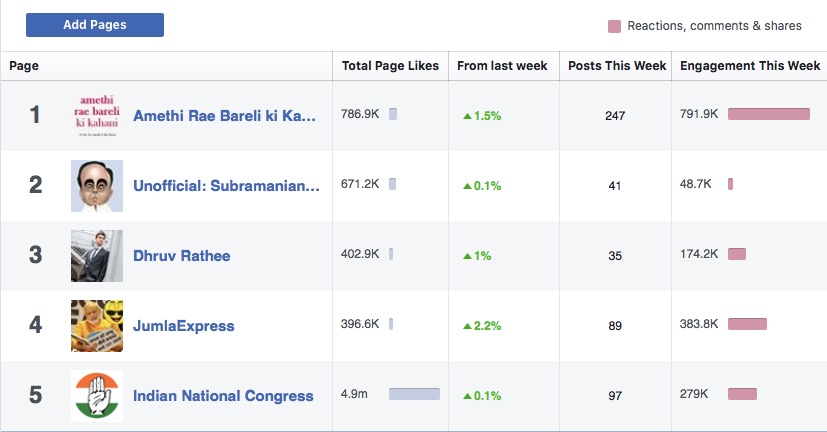 There have also been some concerns about her other party page deliverables too. The WhatsApp world is still firmly under the BJP’s control and hasn’t been breached by her team. The Congress party’s official Facebook page is lacklustre with engagement levels lower than most national parties. It picks up when Rahul goes on a roadshow, but stays more or less stagnant with nearly 2.5 lakh weekly engagement number. Even the Aam Aadmi Party has four times that number in weekly engagement. Supporters’ pages like Amethi Rae Bareli ki Kahani on Facebook have better engagement. 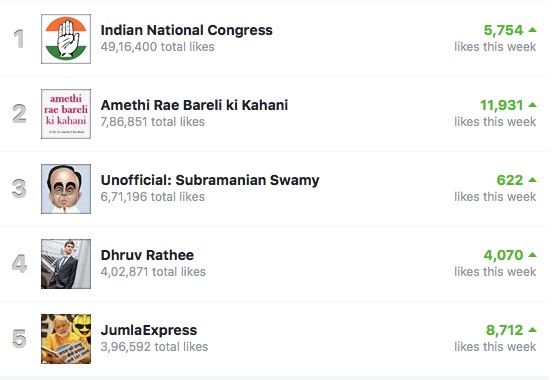 All the focus appears to be on Twitter, which is great for PR and for issuing statements. But real conversations and engagements happen on Facebook, because that is where the voters are.

Some unconfirmed buzz in the party is that Spandana was asked to hand over the Facebook and Instagram accounts of Rahul a few days ago. And, that is when the latest talk about her difficulties surfaced and the ‘bug’ selectively attacked her Twitter bio.