E.P. Unny reflects on the latest Intergovernmental Panel on Climate Change (IPCC) report that put out a clarion call for nations to cut emissions while warning of a 1.5 degree Celcius increase in climate in the next 20 years. Developing and poorer nations have been pushing for developed nations to carry the weight of the task.

Sandeep Adhwaryu takes a dig at the Delhi Police for registering an FIR against ‘unknown persons’ a day after anti-Muslim slogans were allegedly raised at Jantar Mantar in the national capital amid a protest against ‘colonial-era laws’.

Manjul takes a swipe at the fact that politicians with a prior criminal record or a controversial history are often taken on board by political parties. 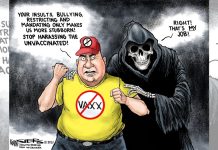 ‘Harassment’ of unvaccinated and ‘invisible fortune’ that is cryptocurrency 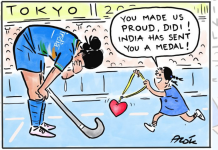 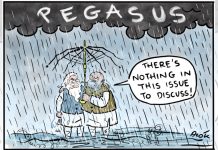 Modi govt in eye of Pegasus storm, and the bulldozer vs cycle saga in Parliament