Kolkata: A day after BJP president J P Nadda’s convoy was attacked in West Bengal, the Union home ministry on Friday summoned the state’s chief secretary and director general of police on December 14.

West Bengal Chief Secretary Alapan Bandyopadhyay and Director General of Police (DGP) Virendra have been called by the home ministry, an official said.

The chief secretary and DGP are expected to be asked to explain the law and order situation in West Bengal, the steps taken to prevent political violence and other crimes in the state, another official said.

The two top-most civil and police officers of West Bengal were called by the home ministry within hours of receiving a report from West Bengal Governor Jagdeep Dhankhar on the law and order situation in the state.

Dhankhar was asked to submit a report after Nadda’s convoy was attacked on Thursday when he was travelling to Diamond Harbour in South 24 Parganas district to address a rally there.

The home ministry is yet to receive a report from the state government on the “serious security lapses” during Nadda’s two-day visit to the state. 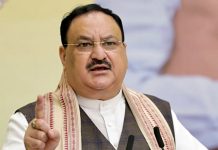