Bhopal: A week after the Election Commission (EC) ordered initiation of criminal action in the matter of “extensive use of unaccounted cash” and illegal transfer of money during the 2019 general elections in the state, the Madhya Pradesh government is still dragging its feet in the matter, with no order yet of even a preliminary inquiry.

The EC order is based on a Central Board of Direct Taxes (CBDT) report, which named several former Congress legislators, including two ministers in the then Kamal Nath cabinet, as having allegedly received cash.

The Shivraj Singh Chouhan-led BJP government is now in an awkward position since at least a dozen of these MLAs defected to the BJP from Congress in March this year following Jyotiraditya Scindia’s exit from the Congress.

Among them are cabinet ministers Bisahulal Singh and Pradyumna Singh Tomar, who were part of the cabinet even under Kamal Nath. Former Congress MLA Rajvardhan Singh, also named in the report, is a minister in the Shivraj government.

Asked why the MP administration is yet to act on the EC order, a state government spokesman told ThePrint that the chief secretary and the additional chief secretary will be going to Delhi on 5 January to explain the government’s position.

The Income Tax department had on 7 April 2019 raided 52 premises linked to the aides of then Chief Minister Kamal Nath and others in Delhi-NCR, Bhopal, Indore and Goa.

A day later, the CBDT said the raids revealed a “well-organised racket of collection of unaccounted cash of about Rs 281 crore”, and that a part of the cash had been transferred to the headquarters of a political party in Delhi.

On 16 December, the EC issued its order saying it had asked the state’s chief electoral officer (CEO) to take criminal action against “entities/individuals engaged in unauthorised and unaccounted cash contributions to individuals on behalf of a certain political party”.

The statement said the EC had received a report from the CBDT that “specifically mentions instances of prima facie involvement/nexus of public/government servants in authorised/unaccounted cash transactions.”

When reporters last Thursday asked Chief Minister Shivraj Chouhan about the EC order, he said: “Law will take its own course.”

Acknowledging that the CBDT report has been received, state Home Minister Narottam Mishra told reporters Monday “whoever is guilty will be punished. No matter how big an individual (named in the report), no one will be spared”.

Mishra claimed the report provides proof of the BJP’s allegations that “Vallabh Bhavan (secretariat) had become a den of brokers (during the Congress regime). Kamal Nath’s (administration) was the most corrupt government in MP”.

The minister also claimed that Kamal Nath’s recent statement on “retirement” was prompted by the CBDT report.

A BJP leader, who is a Scindia confidant, said politicians named in the CBDT report have little to worry because diary notes are not treated as substantial evidence by courts.

“Government officials who raised funds for the ruling party by misusing their position will be in trouble,” he said, alleging that they raised funds and gave it to certain individuals close to Kamal Nath.

Meanwhile, Chief Election Commissioner Sunil Arora told news agency PTI Tuesday that the EC would call the Madhya Pradesh chief secretary and additional chief secretary (home) to Delhi early next month to apprise it of the progress made in the matter.

Congress, meanwhile, said the BJP government was worried about the possible fallout of the criminal action against those named in the CBDT report.

“Three persons who received money are part of the Chouhan government. For an impartial probe, the CM will have to seek their resignation but it will create political instability,” said party leader Bhupendra Gupta, who was the former Officer on Special Duty to Kamal Nath.

Talking about the EC direction, the Congress leader said the poll body had exceeded its brief. “It can act when an election is taking place, and not one-and-a-half years later when a new government (Central) is already formed. The Congress is not worried.”

Former CM Digvijaya Singh Sunday told reporters that if an FIR is indeed registered on the basis of the 2019 IT raids, then FIR should also be registered against an IAS officer based on Income Tax raids carried out in 2013 in MP. The IAS officer he referred to was the OSD to CM Shivraj Chouhan then. 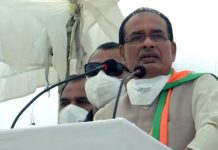