New Delhi: The Parliament on Wednesday passed a bill which seeks to encourage smaller airports to expand air connectivity to relatively remote and far-flung areas.

Rajya Sabha passed the Airports Economic Regulatory Authority of India (Amendment) Bill, 2021, after a brief discussion amid protest and sloganeering by the Opposition over various issues, including the Pegasus snooping controversy and farm laws.

Lok Sabha has already passed the bill on July 29.

The bill, which will amend the Airports Economic Regulatory Authority of India Act, 2008, was moved on the floor of the house for passage and consideration by Civil Aviation Minster Jyotiraditya Scindia.

Being an independent regulator for protection of the interests of airports, airlines and passengers, the Airports Economic Regulatory Authority of India has, since its inception, been determining the tariffs of aeronautical charges at major airports in the country.

While participating in the debate, K R Suresh Reddy of TRS supported the bill and said that it was essential for the country as it will help the common man who uses air travel. However, he also mentioned that there are certain apprehensions about the bill such as clubbing of major airports with other ones.

“What are the criteria of clubbing the major and other airports, which he has proposed in the bill? Will this clubbing have any major impact on the classification of major international airports,” he asked.

M Thambidurai of AIADMK supported the bill and wanted to know whether Hosur airport in Tamil Nadu can be clubbed with Vellore airport.

V Vijaysai Reddy of YSRCP said by clubbing profitable and non-profitable airports as a group and offering as a package to the prospective bidders, the bill will promote more airports in low volume areas, especially in rural locations.

“It will lead to the simultaneous development of small airports and help expand the air connectivity in the country,” he said supporting the bill.

GK Vasan of TMC (M) supported the bill and said the government should concentrate on smaller airports.

Replying to the debate, Scindia said airports would be developed in smaller towns as suggested by some of the members. This is according to the vision of Prime Minister Narendra Modi to make air travel accessible to common people.

“Earlier, Airport Authority of India use to play a role in bigger airports and after this, we are also going to smaller towns,” he said, adding some members gave good suggestions during the debate, which would be considered by the government.

Taking a dig on the opposition, which was protesting the well of the house during the passage of the bill, Scindia said: “They had constructed only 75 airports in last 70 years and Narendra Modi government in last six years has increased this 75 to 126.”

“With this bill, we would democratise the (air) travel, we would take the airport to cities, where the rail connectivity has reached,” he said.

Now small places such as Darbhanga (Bihar), Belgaum (Karnataka), Jharsuguda (Orissa), Rupsi (Assam), will have around 150 to 170 flights per week.

“This is an ambitious bill, based on which a new foundation for development would be laid,” Scindia added.

After the minister’s brief reply, the Upper House passed the bill amid protest and sloganeering.

Immediately after that Deputy Chairman Harivansh Narayan Singh, who was in the chair, adjourned the Rajya Sabha till Thursday.

Under the Act, “major airport” has been defined to mean any airport which has, or is designated to have, annual passenger throughput in excess of three-and-a-half million.

However, it does not provide for determination of tariff for a group of airports. The airports where currently the traffic potential is low and loss making are not expected to attract reasonable competitive bids.

Therefore, the government has decided to club or pair airports having profitable and non-profitable airports which could be offered in public-private partnership mode as a package to the prospective bidders, according to the bill. 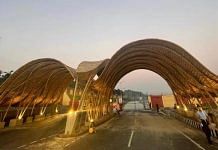 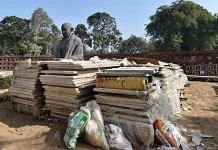