New Delhi: A public notice about the release of admit cards for the Joint Entrance Exam (JEE) Mains has created confusion among parents and students regarding the dates of the exam, set to begin from 20 July.

The notice released by the National Testing Agency (NTA) Tuesday night said the third phase of JEE Mains exams will be held on four dates — 20, 22, 25 and 27 July. However, this is in contradiction to what the former education minister Ramesh Pokhriyal Nishank had announced. Pokhriyal had said that the third phase of the exam will go on from 20 July to 25 July and the fourth phase will begin from 27 July and will go on till 2 August.

“The National Testing Agency is conducting the Joint Entrance Examination (Main) – 2021 for the postponed April Session (Session – 3) in Computer Based Test (CBT) mode at different centres located in 334 cities throughout the country and abroad on 20 July, 22 July, 25 July, and 27 July 2021. The total number of registered candidates for Session – 3 is 709519,” the NTA notice read.

“Separate information will be given for downloading the Admit Card for Session – 4 for JEE (Main) – 2021,” it added.

This left many parents and students wondering whether the government wants to reschedule dates for the fourth phase. Some of them who registered for the third phase got 27 July as their date of exam on their admit cards.

However, the NTA has clarified that there is no change in the fourth phase dates as of now and it’s only because of “technical reasons” that some students in the third phase have been given 27 July as their exam date.

“As of now, the fourth phase dates remain the same. The third phase date has been extended till 27 July because of purely technical reasons. The agency wants to manage the backlog of students who were already registered and the new ones who registered later on,” a senior NTA official told ThePrint.

After the dates were announced on 6 July, those who could not register for the exam earlier were given time from 6 to 8 July to register.

ThePrint reached the education ministry spokesperson via message for an official comment on the issue but there was no response until the time of publishing this report.

Several parents and students raised concerns on social media after the NTA notice.

“3rd term of JEE Main has been scheduled from 20th to 25th Jul’2021 but, my daughter’s date of exams has been scheduled on 27th Jul as per admit card issued, which is beyond the declared dates as mentioned above. Please issue details (sic),” wrote a Twitter user M.K. Acharya.

Secondly, 3rd term of JEE Main has been scheduled from 20th to 25Jul'2021 but, my daughter's date of exams has been scheduled on 27th Jul as per admit card issued, which is beyond the declared dates as mentioned above. Please issue details. 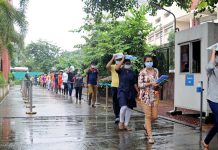 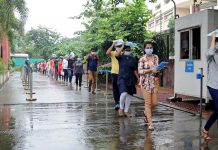