According to World Bank, no. of global poor increased by 7.1 crore in 2020, of which at least 33% were in India. Other methods used to estimate poverty in India due to lack of govt data.

New Delhi: The Covid-19 pandemic broke a streak of declining poverty globally and within India, according to a new World Bank report, with 2020 seeing the number of poor in India rising by between 2.3 crore and 5.6 crore, depending on the method of estimation.

This high share of global poor in India is not surprising given the country’s large population, but what is notable is that the only country with a higher population than India — China —has only a limited contribution to the increase in global poverty.

“The estimated increase in global poverty of 71 million people is heavily influenced by the most populous countries because each individual in the world is weighted equally,” the World Bank report said. “Although large, China is home to a small share of the global extreme poor and had a moderate economic shock in 2020; as a result, China does not contribute much to the global increase in extreme poverty in 2020.”

The World Bank goes on to say that the wide range in India’s poverty estimates for 2020 is due to the fact that the Indian government has not yet finalised its 2020 poverty estimates, and so various different methods have had to be used to estimate poverty in India. 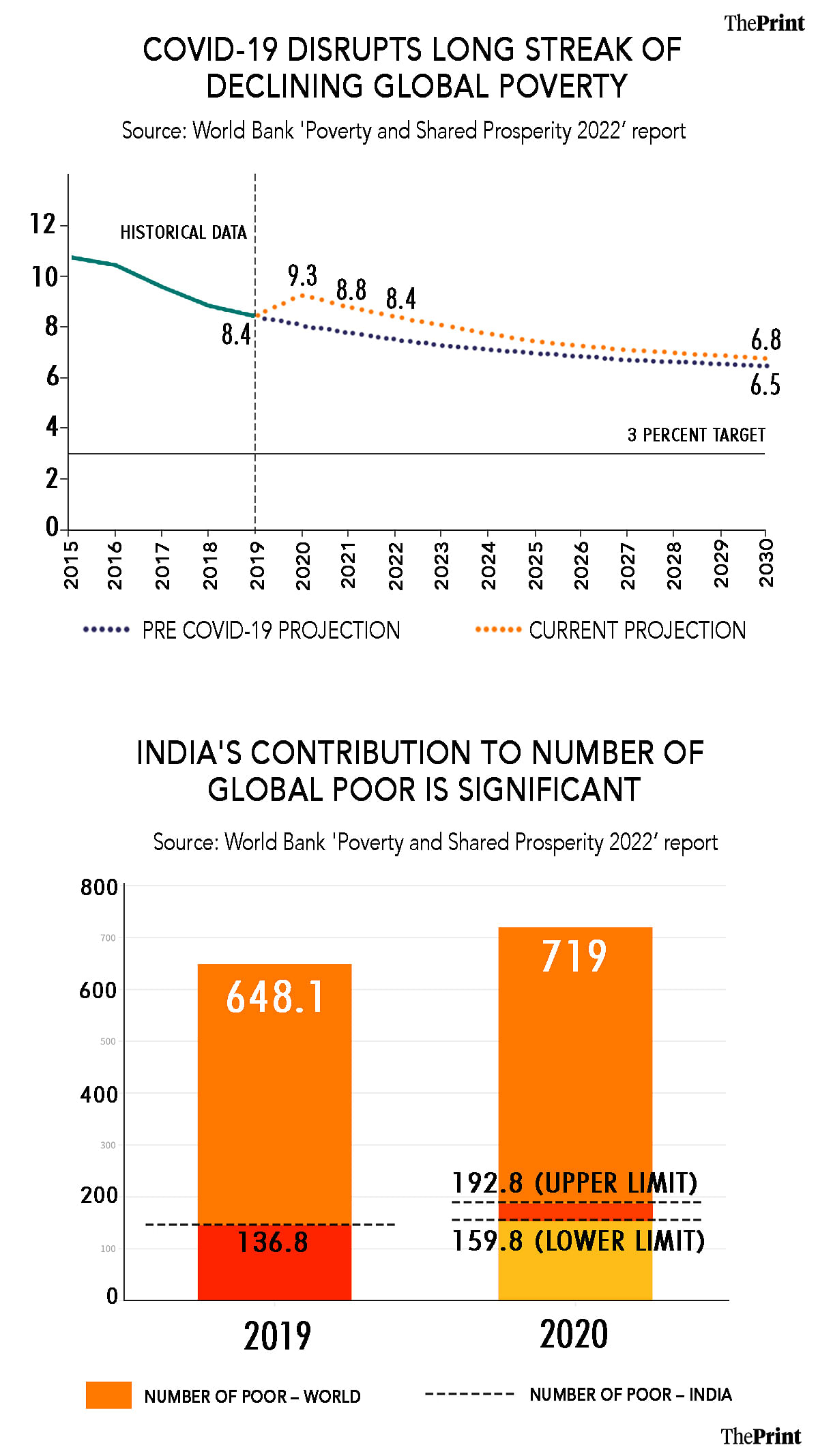 With no govt data available, report relies on CMIE data

An estimate using India’s national accounts implies that 2.3 crore additional people were pushed into poverty in 2020, whereas an estimate based on the Consumer Pyramids Household Survey (CPHS), conducted by the Centre for Monitoring Indian Economy (CMIE), a private data company, puts this number at 5.6 crore. The World Bank has used the latter number in its calculations.

In fact, the World Bank leans heavily on CPHS data for its poverty estimates for previous years as well due to the lack of official data on poverty.

“This report publishes global and regional estimates based on new data for India available for 2015-19,” the report said. “The source of the data is the Consumer Pyramids Household Survey (CPHS), conducted by the CMIE. India has not published official survey data on poverty since 2011. Given the country’s size and importance for global and regional poverty estimates, the CPHS data help fill an important gap.”

The latest household consumer expenditure survey by the National Statistical Office for 2017-18 was scrapped in 2019, with the government citing “data quality issues” as being the problem.

According to the World Bank report, “the data reveal that poverty has declined in India since 2011, driven by a larger poverty reduction in rural areas”. However, it said that even though overall poverty declined during that period, it is less than what earlier estimates used for global poverty measurement suggest.

Globally, too, poverty was on a downward trajectory until the pandemic hit. In fact, the pandemic has resulted in a historically large addition to poverty levels globally, according to the World Bank.

“Based on the additional data collected over the last two years, it is now clearer that the Covid-19 pandemic has indeed triggered the most pronounced setback in the fight against global poverty since 1990, and most likely since World War II,” the report said.

What’s worse is that while there was a nascent recovery in poverty levels in 2021, the ongoing war in Ukraine has once again resulted in a rise in the number of global poor. The World Bank ‘nowcasts’ current poverty levels by using gross domestic product (GDP) growth rates to forecast household incomes.

“Nowcast estimates suggest that poverty reduction resumed in 2021, but only at the slow rate of progress seen prior to the crisis,” the report said.

“At least 667 million people were expected to be in extreme poverty by 2022. That is 70 million more than the forecast would have been without the lingering effects of Covid-19 and the Russian invasion of Ukraine. In a worst-case scenario, up to 685 million people could be in extreme poverty — 89 million more than would have otherwise been the case,” it added.

In other words, the after-effects of the pandemic and the ongoing Ukraine war could result in just 5 million (50 lakh) people moving out of poverty in 2022.