Bengaluru: Congolese nationals held a protest in Bengaluru as a 27-year-old from the central African nation died while in police custody in the city for an alleged drug deal. Viral videos of the protest, which took place Monday, showed at least one protester bleeding after allegedly sustaining injuries in a police lathicharge.

Police have identified the deceased as Joel Shindani Malu, who also went by the alias Joan, describing him as a “drug peddler” who was caught red-handed late Sunday night. They said he complained of chest pain hours after he was brought to the J.C. Nagar Police Station, and died of a cardiac arrest at a hospital Monday morning.

However, members of the Congolese community stated that he was fine before his arrest, and died after he was “brutalised” while being apprehended. Bengaluru Police has denied the allegations.

On Tuesday, officials from the Delhi-based Embassy of the Democratic Republic of the Congo arrived in Bengaluru to look into the matter. Police in Bengaluru told ThePrint that an autopsy will be conducted after Joel’s body is inspected by embassy officials.

The protest took place outside the J.C. Nagar Police Station, and involved 30-40 members of the Congolese community seeking a detailed inquiry into the matter. As the protest raged, police personnel present at the site launched a lathicharge.

“The way they were beaten up was too extreme, I will not deny it. Police could have done it in a different way at least to enforce the law, but not beaten up people like this, so they would bleed,” Japhet Zola, president of a group representing the Congolese community in Bengaluru, told ThePrint.

Police, however, claimed to have handled the matter with “utmost restraint”. It was only after some of the protesters turned aggressive “that such measures were taken”, Deputy Commissioner of Police (DCP) North Dharmendra Kumar Meena said.

Five Congolese nationals were arrested for the protest, with police invoking charges such as obstructing public servant from discharging duty, outraging modesty of a woman, destruction of public property, and assaulting a police officer.

‘Caught in the act’

According to police, they had received information Sunday night that Joel would be involved in a “drug deal” near Banjara Layout. By the time a team of police personnel in plainclothes arrived at the location, Joel had changed the location of the trade, Meena claimed.

“Our informant and a policeman then arrived at the second location in Babusapalya, Hennur, where they found two foreign nationals on a Honda Activa,” Meena added.

The informant is said to have identified Joan as the pillion rider. Following this, the personnel proceeded to apprehend Joel and a scuffle ensued.

“A few packets of MDMA (a psychoactive drug) fell on the ground during the scuffle. Meanwhile, our team, which was 30-40 metres away, came and managed to apprehend Joan,” Meena said.

Joel, he added, was brought into J.C. Nagar police station at 2.15 am and an offence was lodged under Section 21 of The Narcotic Drugs and Psychotropic Substances Act, which deals with “punishment for contravention in relation to manufactured drugs and preparations”.

Meena claimed Joel had arrived in India a few years ago on a student visa that had expired since.

“We knew he was using an alias and he didn’t display any ID card or give his identity… Since we didn’t know his identity, which country he belonged to, we kept him in the police station for further inquiry and the police team (that had apprehended him) left for their homes,” he said. “At 5.10 am, the sub-inspector received a call saying that Joel was complaining of chest pain and cold.”

A preliminary medical examination at the hospital, he added, indicated that Joel was suffering from bradycardia (slow heart rate). Despite rounds of CPR and other treatment, he succumbed to a cardiac arrest, he said.

Ali Kali, vice-president of the Congolese group, disputed police’s account of Joel’s death. He said Joel’s girlfriend, as well as many of his friends, had claimed that he was in the pink of health before his arrest.

“According to them, when they arrested him, he was brutalised…,” Kali said. “They also said they had received a call where police told them to bring money or Joel would be further brutalised.”

Meena denied allegations of police brutality, saying police had followed all protocol when apprehending Joel. “We have taken it as an unnatural death in police custody and the provision laid by the human rights commission and the Supreme Court was followed stringently,” he said.

“One of the protesters also hit my staff and she sustained a head injury, after which we attempted to detain them under preventive sections of the law. When they started assaulting our policeman, we arrested five of them,” Meena said.

Kali, who was inside the police station at the time, disputed this as well, saying the protest had largely been peaceful. Several other protesters, too, have decried police’s handling of the protest.

“We have seen in the videos that the African protesters were bleeding. We haven’t seen any police officers that have been injured. Where are they?” said Maria, who didn’t wish to disclose her surname.

“We Africans are not safe here, we want the government to look into this.”

Another member of the community, who identified herself as Selena, said, “The protesters were brutally beaten up because they went to protest for their brother, who is now deceased, I don’t see a problem in them protesting for this.” 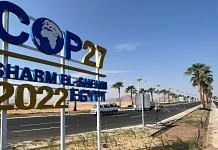 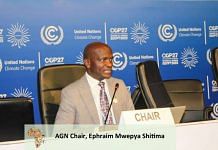 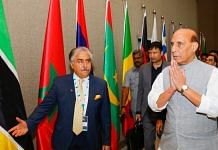