New Delhi: As thousands of farmers continue to camp in and around Delhi, protesting against the central government’s three new farm laws, Prime Minister Narendra Modi Sunday said these agriculture reforms have not only broken the shackles of farmers but also given them new rights and opportunities.

Addressing the nation through his monthly radio address Mann Ki Baat, Modi said, “Decades old demands of farmers which were promised to be fulfilled by many political parties, have now been met with. Parliament has passed farm reform laws after rigorous brainstorming. These reforms have not only broken the shackles of farmers but have also given new rights and opportunities to them. These rights started mitigating problems of farmers very quickly.”

Several farmers’ organisations, mostly in Punjab and Haryana, have been protesting against the three farm laws that have also been termed “anti-farmer” by the Opposition.

One of the major demands of the farmers is that the Minimum Support Price (MSP) be made a legal provision to assure a better price to them.

“Whatever may be the field, away from all misinformation and rumours, correct knowledge is an added strength for everyone,” he added.

Modi cited the example of a farmer from Maharashtra’s Dhule, Jitendra Bhoiji, who did not get paid for his maize crop by the traders. “Buying crops from farmers but not paying them for months, those who bought Jitendra’s produce were probably following this old norm,” he said.

“In this situation, new farm laws passed in September came to his (Bhoiji’s) rescue. Under this law, it’s mandatory to pay within three days of purchasing the produce. If payment is not made, then the farmer can lodge a complaint. Now, when our farmer brother had power of this law, his problem was bound to get resolved. He filed a complaint and got his dues within a few days. It means, complete and correct knowledge of the law became Jitendra’s strength,” PM said.

Modi also spoke on the Covid-19 pandemic and said it had almost been a year since the world saw its first case of the deadly disease. “Coming out of the lockdown, now the discussion on a vaccine has commenced. However, any sort of negligence towards coronavirus can be deadly even now. We have to firmly keep fighting against the disease,” he added.

Ahead of Guru Nanak Jayanti Monday, Modi said the legacy of ‘langars’ to feed needy people had continued through the Covid-19 pandemic by the Sikh communities.

He also lauded Dr Gaurav Sharma, one of the youngest and newly-elected MPs in New Zealand, who took oath of office in Sanskrit. 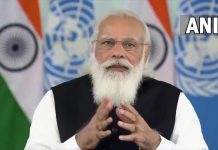 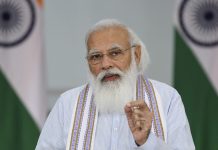