New Delhi: Authorities at IIT Madras are probing whether the Covid-19 spread on campus originated from the mess or was due to imported cases. Sixteen mess workers have so far tested positive.

“The cause of the outbreak is being investigated. Cannot say that the mess was the root cause. There could have been other causes also,” the institute said in a statement Monday.

So far, tests on the IIT campus have returned a positivity rate of over 23 per cent — of 449 people tested, 104 are positive. Of these, 87 are students, 16 are mess employees and one is a campus resident.

A state government team visited the campus and took X-rays and CT scans of all the positive patients. So far, all of them are said to be mild cases but are being closely monitored.

The incident has prompted the Tamil Nadu government to write to all district collectors, urging them to keep an eye on hostels and messes and “encourage takeaway food”.

In a letter addressed to all collectors in the state and the Chennai commissioner, the state health department has said: “Since colleges have opened, we need to keep an eye on hostels and messes and encourage takeaway food. We have clusters reported in IIT Chennai and immediately the corporation and health department initiated measures.

Similar challenges are likely in other college hostels also. Anyone with remote symptoms or those who return from other states should be strictly monitored and tested and positives isolated. Last but not the least, masks in public places have to be intensively monitored and implemented.”

The letter also warned against a “sense of casualness among people” and that “Covid fatigue has also been affecting frontline staff”.

“Let us not allow anyone to relax at this critical stage as lower temperatures, crowded places, closed places and contacts all are a recipe for a spurt,” the letter added.

Tamil Nadu, which saw one of the earliest outbreaks of the disease, has brought down numbers significantly but the IIT cluster may give the health department new reasons for worry.

Some hostels have seen higher numbers of positives

The total number of students on the IIT Madras campus currently is 774 who are distributed in nine hostels and one guest house. Of the hostels, Krishna and Jamuna with 22 and 20 cases respectively, account for about 40 per cent of the total cases reported in the campus so far. Five cases have been reported from Saraswathi, four from Tunga, three each have been reported from Alakananda, Sabarmati, Narmada, and Tapti, two from Godavari and one from the guest house.

“After the first four cases were reported on 9 December, the mess was closed down. Of the 20 samples taken from the mess workers, four tested positive,” a senior official in the state health department said. “A new catering service was arranged by the management with negative workers from that day but after more students started turning positive, the dining hall was closed on 10 December and packed food distribution started in the rooms.”

The official added that the campus is now being disinfected. “Periodic disinfection of the campus has been undertaken with lysol and sodium hypochlorite solution. Foot-operating pipe arrangements have been done in all wash areas,” the official said. “All students are currently in room quarantine and departments and labs have been closed. The positive cases are stable and under supervision of doctors from the King Institute.”

Sources told ThePrint that the cluster came to light during a routine chat that Radhakrishnan had with various government hospitals to check the bed occupancy situation. That is when it was flagged to him that King Institute had been seeing a large number of cases from IIT.

The official quoted above said samples continue to be collected from the campus and that all primary and close contacts are being tested.

“We are examining whether the cause of the spurt is the mess or are imported cases. Mask, handwashing, social distancing and other standard procedures are being monitored,” the official added. “All districts have been sensitised to keep a watch on public places, especially educational institutions and hostels, and fever surveillance has been intensified.” 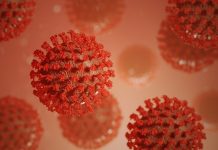 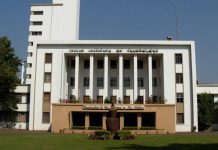 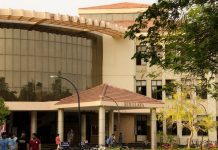