Kejriwal’s shirt was digitally elongated to give it the appearance of a kurta in the photo. Hence, the weird shape.

“Looks like he has worn someone else’s kurta,” Pandit captioned the photo, which has gone viral since.

Fact-check: Well, the joke’s on these “believers” because it was a morphed photo – Kejriwal’s shirt was digitally elongated to give it the appearance of a kurta. Hence, the weird shape. 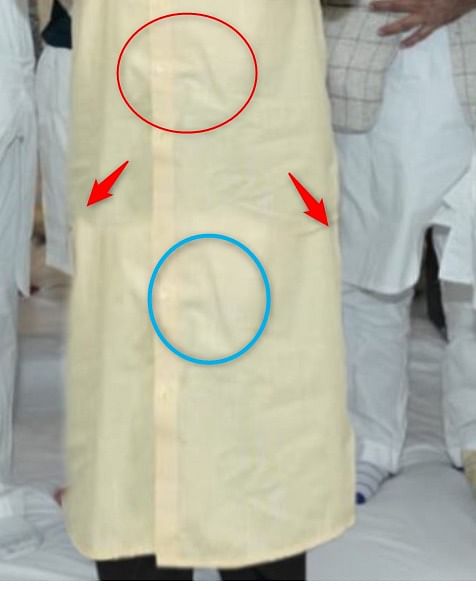 The Delhi Chief Minister and Mann’s party boss Kejriwal was among the very few invited to attend Mann’s no-frills wedding with Dr Gurpreet Kaur on Thursday. The 48-year-old chief minister is divorced from his first wife, but his two children were at the intimate ceremony.

Kejriwal kept it simple and wore a beige shirt and black trousers for the low-key festivities.

Below is the original image:

It is a celebration time for all of AAPians. Big day for our AAP family.
AAP, AP wishing our Bhagwant Mann ji and Dr Gurpreet Kaur, a very happy married life. @BhagwantMann pic.twitter.com/tsIkf8auV7

Many social media users, however, believed the morphed photo to be authentic and widely shared it on their handles. Ashoke Pandit’s post was retweeted almost 1,000 times and had over 7,000 likes.

The social media co-convenor of the Bharatiya Janata Yuva Morcha (BJYM) in Delhi, Akanksha, also shared the image with the caption: “Who could have designed Kejriwal’s clothes.”

There were several other attempts at ridiculing the Delhi Chief Minister. Have a look.

Also read: Viral photo of Rath Yatra celebrations in Bangladesh not fake, but it was clicked in 2019