New Delhi: Since February, the state of West Bengal, where an eight-phase assembly election is underway, has seen all political parties and their leaders hold massive rallies and public gatherings.

The parties have come under severe criticism for holding road shows and flouting Covid protocols at a time the second Covid wave is sweeping the country.

In West Bengal, active cases had gone down to 3,110 on 11 March, before they started increasing again. However, since March 20, the number of active Covid cases in the state is over 53,000 — a 1500 per cent rise. While several factors have contributed to the spread of Covid infection, large gatherings have been the major reason for the spike in cases.

Even though it is difficult to assess which political gatherings may have turned into super spreader events, ThePrint looked at some of the worst-affected districts from different phases of the elections to see which events may have led to the steepening of the Covid-19 curve and what happened to active case count at the district-level around the time each of these districts went to polls.

Of eight phases, elections for five phases have already been conducted. These include polls held in 16 districts of the state.

As of 18 March, Purulia reported 35 active Covid cases. On the same day, PM Narendra Modi addressed a rally there. Within four days, cases in the district started to increase.

A month later, active cases in the district stand at over 1,200 — nearly 34 times higher than a month ago.

The active cases in the district stood at 126 on 14 March, a little over two weeks before the first phase of polling. Around this time, TMC candidate Paresh Ram Das campaigned in a local train from Canning station to Sealdah.

By the date of the first poll, active cases had nearly doubled, increasing further as the election rallies continued in the district.

In Howrah and Hooghly, elections were held in two phases — 6 April and 10 April.

In Howrah, cases began to increase since 17 February when the district had just 84 active cases. This coincides with Bengal BJP president Dilip Ghosh’s visit to the district to celebrate Saraswati puja.

Within a month, cases in the district doubled. At the time the district went to polls, cases had gone up to over 1,000.

For Hooghly, the rise in infections happened almost a month later — coinciding with the date when BJP members held protests. On 17 March, the district had 81 active cases. However, after the protests, cases started to increase, crossing 500 by the polling date.

Currently, North 24 Parganas is the worst-affected district (excluding Kolkata). As of Tuesday, the district reported 14,220 active cases of Covid-19.

On 22 March, the district had reported the minimum number of active cases this year at 3,420, after which cases began to increase.

However, the spike in cases came shortly after a clash between TMC-BJP workers in the district on 31 March. Active cases reached 12,526 by the time the district went to polls. 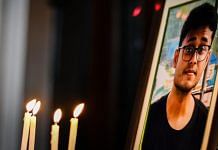 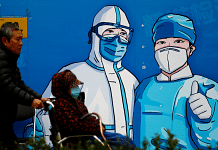 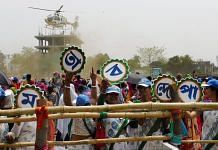 Bengal politics is not casteless or Bhadralok-free. But it’s still not a deciding factor