New Delhi: Scientists have identified the blood types of our closest extinct human relative to show why the species died out in the first place.

Neanderthal individuals had a blood type that made them more vulnerable to infectious diseases that led to high infant mortality, a study published Wednesday in the journal PLOS ONE explained.

Researchers from France have for the first time analysed blood types of one Denisovan and three Neanderthal individuals uncovering new clues to the evolutionary history, health, and vulnerabilities of their populations.

Both Neanderthals and Denisovans were ancient humans who lived across Eurasia, from Western Europe to Siberia, from about 300,000 to 40,000 years ago.

Previous research efforts have produced full-genome DNA sequences for 15 of these ancient individuals, greatly enhancing understanding of their species. However, despite being encoded in DNA, their blood types have received little attention.

What blood types reveal about mating habits, place of origin

The team used systems that are often used in medical settings for blood transfusions to decode the blood types of the individuals from their genome that has led to several findings.

For instance, the ancient individuals had blood type alleles — different versions of the same gene — in combinations that confirm that Neanderthals and Denisovans originated in Africa.

The team also found a genetic link between the Neanderthal blood types and that of an Aboriginal Australian and an indigenous Papuan, which suggests that Neanderthals and modern humans mated before modern humans migrated to Southeast Asia.

In Neanderthals, researchers found the blood type alleles was associated with an increased vulnerability to virus infections that affect foetuses and newborns, lead to low reproductive success and genetic diversity compared to modern humans.

“This work identifies the blood group systems in Neanderthals and Denisovans in order to better understand their evolutionary history and to consolidate hypotheses concerning their dispersal in Eurasia and interbreeding with early Homo sapiens,” researchers said. 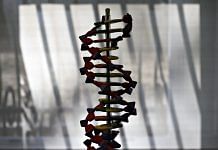