New Delhi: It’s rare to find a film where there is no one hero. Pyar Kiye Jaa (1966) is one such film where every single character is seen carrying the film on their shoulders. Om Prakash, Shashi Kapoor, Kishore Kumar, Mehmood and even Mumtaz, of whom we only catch a few glimpses in the film, all are ‘heroes’ in the film livening up the screen.

Each character brings something to the table — too many cooks do not always spoil the broth here.

A remake of Tamil comedy Kadhalikka Neramillai (1964), the film was directed by C.V. Sridhar, who had helmed the original film.

Mehmood received his first Filmfare Award as best comedian in 1967 for this film. In the death anniversary week — he died on 23 July, 2004 — of the actor, ThePrint does a rewind of this timeless romantic comedy.

The film within the film

The film begins with a song where Shyam (Kishore Kumar) and Malti (Kalpana Mohan) are dancing on the beach. This is their last meeting before Shyam heads back to work for his father Devraj (Chaman Puri) and Malti leaves Mumbai to return to the family estate near Pune with her sister Nirmala (Rajasree). The patriarch of the family is Ramlal (Om Prakash).

The estate employs Ashok (Shashi Kapoor) as an assistant manager. He is a good friend of Shyam (Kishore Kumar). Meanwhile, Atma (Mehmood), Ramlal’s son, is crazy about film-making and has a production house called ‘Wah! Wah! production’ — yes, if you’re a millennial and know next to nothing about films from the ’60s, the name might still ring a bell. Mehmood has a cameo in the 1994 film, Andaz Apna Apna, in which he introduces himself as the owner of Wah Wah Productions in this film — as a homage to Pyar Kiye Jaa.

However, a minor misunderstanding leads Ramlal’s daughters to force their father to fire Ashok. Ashok camps outside Ramlal’s home demanding justice. His rebellious attitude and histrionics outside their home so impress Atma that he asks him to write the script of his film.

Meanwhile, Ashok falls in love with Nirmala whose wealthy father Om Prakash has a single-point agenda — finding an affluent groom for his daughter. Ashok requests Shyam to help him impress Ramlal.

Shyam plays along. He disguises himself in an elaborate getup dressed in an achkan suit, donning a fake beard, and carrying a walking stick to introduce himself to Ramlal as the monied father of Ashok. He, however, finds himself in a tricky situation — the love of his life, Malti, happens to be Ramlal’s daughter (remember that beach scene in the beginning?).

What follows is a cocktail of comedy, drama, and slapstick as both Ashok and Shyam try to win the love of their lives, and Atma looks for opportunities to make his film-making dream come true.

The best lines go to Mumtaz

The best part about the film is that it does not drag in pace — the two and a half hours never seems a stretch. Most of the stars are stalwarts in their own right, and when they come together on screen, it is a laugh riot.

But Mumtaz gets the best comic lines in the film, even more than the two leading ladies. She stands out with her vivacious energy and bubbly personality. She plays a simple, village girl Meena — Atma thinks she is the perfect heroine for his film.

The scene where he is making her practise her dialogues is one of the funniest scenes of the film. The most funny, undoubtedly, is the one in which when Mehmood gives his father a narration of his film complete with sound effects and Om Prakash plays the doting yet panicky father to the hilt.

In one of his interviews, Mehmood had said: “Today, lots of people… say, ‘What a scene Mehmood has done!’ But it is Om Prakash ji who has brought Mehmood up for giving the reaction.”

Shashi Kapoor is charming in the film and is good in the comic scenes, barring maybe the one where he almost forces the heroine to say ‘yes’ to his proposal. His on-screen chemistry with Kishore Kumar, who has done his playback since the early 1970s, is crackling. Kishore Kumar proves his versatility yet again — he transforms himself chameleon-like from a young man to playing Shashi’s father without missing a beat.

Mehmood is a delight to watch in this film, yet annoying. But that’s just how Atma is. His squeaky-voiced character, his bursts of mad shouting all make him memorable. His craze for film-making which he brings up at every given opportunity in the film is a tad melodramatic but not overdone. The writing by N.S. Bedi, Chitralaya Gopu and Rajendra Krishan help bring that balance.

Laxmikant Pyarelal has done justice with the film’s music — ‘Phool Ban Jaaunga’, beautifully picturised in a garden, is a memorable melody.

Overall, Pyar Kiye Jaa is a good romantic comedy for its retro fun and of course, for the memorable performances of the yesteryear legends.

Also read: Footpath — the 1953 Dilip Kumar movie that still holds a mirror up to society 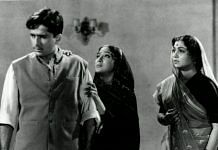 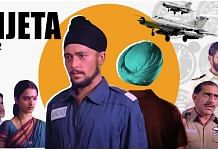 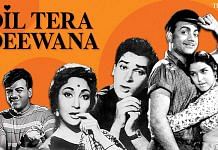 Dil Tera Deewana may have starred Shammi Kapoor, but the real hero was Mahmood