New Delhi: During the 1950s, almost all Hindi movies had an underlying social or political message. Those were the years when Hindi cinema showcased aspirations and challenges of a newly Independent India. Come 1960s, and the decade changed the face of Indian cinema. From Mughal-E-Azam to Guide and Waqt to Junglee, the era brought colour, romance, optimism, and humour.

Kohinoor (1960) is one such movie which broke the shackles of tragedy and provided the audience wholesome entertainment, long before ‘masala’ movies became mainstream in Bollywood.

It was the third highest grossing film of the year after Mughal-e-Azam and Barsaat Ki Raat.

Replete with beautiful songs, hilarious comic scenes and even an underwater fight sequence, the movie, directed by S.U. Sunny and starring Dilip Kumar and Meena Kumari, is a joy ride for the audience.

It may look like a quintessential Hindi movie — action, romance, drama, abduction — but what sets it apart is the stellar and breezy performances by Dilip Kumar, Meena Kumari and Jeevan.

In this week of Meena Kumari’s death anniversary, here’s a look back at Kohinoor.

Set in a timeless era of kingdoms, both the tragedy king and queen of Bollywood were seen in a different avatar in this movie.

In the movie, Dilip Kumar plays the role of Rajkumar Dhivendra, the prince of Kailash Nagar kingdom. After his father’s death, Rajkumar is crowned the next king, but he is more interested in petting a mongoose.

Meanwhile, Rajkumar’s foster mother (Leela Chitnis) wants him to marry Princess Chandramukhi (Meena Kumari) of neighbouring Raj Nagar kingdom. Rajkumar, who intended to say no to the proposal, is instantly smitten by the princess’s beauty.

But like almost every other love story, there is a villain here too. The Senapati (Jeevan) of Raj Nagar is also enchanted by Princess Chandramukhi’s beauty. He aims to marry her and take over the kingdom from her father. He abducts her and holds her captive unless she agrees to marry him.

Rajkumar tries to rescue the princess but is gravely injured and manages to escape. He is then looked after by Raj Nagar’s royal dancer Rajlakshmi (Kumkum) who also falls in love with the prince.

Rajkumar manages to reach the palace again where Chandramukhi is held captive, this time as ‘Kohinoor baba’, a musician and spiritual guru, and tries to establish a trustful relationship with the Senapati. The story takes eventful turns and Chandramukhi is given two choices — either marry the Senapati or witness the execution of Rajkumar.

Writer Wajahat Mirza weaves several elements into the story which keep the viewers entertained during the course of 150 minutes. Whether it is the comic scenes of Dilip Kumar, sword fights or the song-and-dance sequences, the movie is jaunty and lighthearted despite a few melodramatic moments.

Of the iconic comic scenes in the movie is the one where Dilip Kumar and Jeevan are facing each other after a mirror falls from its frame. As the mirror falls, Dilip Kumar hilariously copies the hysterical actions of Jeevan, making the latter believe that Dilip Kumar is his mirror image.

Actress Tun Tun also makes a brief appearance in the film, where she unknowingly helps the prince and princess meet for the first time. Rajkumar wants to meet the Chandramukhi without revealing his true identity. So he cuts TunTun’s hair, use it as his beard, and pretends to be a saint.

The soundtrack of the movie was composed by Naushad. ‘Madhuban mein radhika nache‘ written by Shakeel Badyuni is still remembered as one of the greatest raga-based compositions in Bollywood. Naushad carefully captured the mood of the film and portrayed it through his music. His choice of instruments, whether the Sitar or Jal Tarang, was apt and added a unique flavour to the songs.

Naushad often used to quote Kohinoor and shooting of “Madhuban Mein Radhika Naache Re”, where Dilip Kumar is shown playing the sitar. To get the hand movements during the shooting right, Dilip Kumar is said to have learnt how to play the sitar. Tabla maestro Zakir Hussain remembered that Dilip Kumar received six months of training from the renowned sitarist Ustad Halim Jaffar Khan sahib prior to the filming of this song.

Meena Kumari is remembered for her roles in tragedies like Pakeezah and Sahib Biwi aur Ghulam, but she portrayed a completely different character in Kohinoor.

A cheerful and giggly princess in Kohinoor, she helps the prince fight Senapati’s men in situations that often turn out to be comical. In one of the scenes, she tries to hide the prince from a servant who enters her room. The prince, being mischievous, calls the servant and when she looks back, Meena Kumari pretends to have a masculine voice.

Kohinoor is a perfect watch for all Meena Kumari’s fans, to remember the actor for her versatility. Dilip Kumar’s comic timing and Naushad’s music are the icing on the cake. 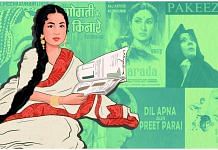 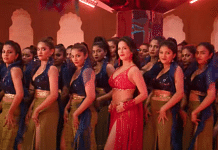 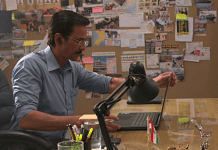