Priyanka Chopra gives a glimpse of her “Vegas night with bae”

Taking to Instagram Story, Priyanka posted an adorable picture, enjoying a walk with Nick. The two are seen holding each other’s hands.

For the date night, Nick wore a yellow jacket with a pair of denims and white sneakers, while Priyanka wore a red overcoat with black boots and carried a tiny black handbag. 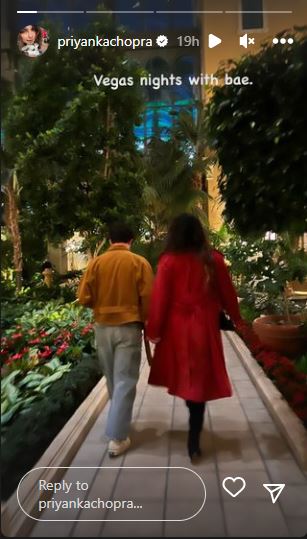 Earlier on Thursday, after returning to LA from a brief visit to India, Priyanka had shared a photo of herself with daughter Malti Marie in her arms, and Nick by their side. The actor captioned the post, “Home.”

Priyanka and singer Nick Jonas got married in a Christian and a Hindu ceremony in Jodhpur’s Umaid Bhawan Palace on December 1 and 2 in 2018. Later, the couple also hosted two receptions in Delhi and Mumbai. In January 2022, the two announced that they welcomed daughter Malti Marie via surrogacy.

Meanwhile, on the work front, Priyanka will be seen in international projects such as ‘It’s All Coming Back To Me’, and the series ‘Citadel’. Produced by Russo Brothers, ‘Citadel’ will hit the OTT on Prime Video. In Bollywood, she will be starring with Alia Bhatt and Katrina Kaif in Farhan Akhtar’s ‘Jee Le Zaraa’, which promises to be another tale of friendship following the lineage of ‘Dil Chahta Hai’ and ‘Zindagi Na Milegi Dobara’, both of which have become cult classics over the years. (ANI)