Reasons for the squeeze range from farm spending to looming elections, but its roots lie in Modi’s 2016 decision to overnight void 86 percent of currency in circulation.

As the banknote shortage spread across several states, the government finally addressed the issue in a statement Tuesday, where it cited an “unusual spurt in demand” for cash. The Finance Ministry rolled out top officials to assure Indians – still stuck with memories about Prime Minister’s Narendra Modi’s shock demonetization in 2016 – that while there’s ample amounts of currency available, steps are also being taken to print more and the broader banking system is healthy.

“Our first order of response is to make sure that adequate cash is available at ATMs and in banks so that whatever demand, for whatever reason it is there, is met,” Sanjeev Sanyal, Modi’s principal economic adviser and a former Deutsche Bank AG global strategist, told BloombergQuint. “There is no crisis, the banks are in perfectly good shape, we have more than adequate cash and more will be printed if necessary. So there is absolutely no need for anybody to panic about this.”

Reasons for the squeeze range from farm spending to looming elections, but its roots lie in Modi’s 2016 decision to overnight void 86 percent of currency in circulation – from where cash levels have never quite fully recovered. Back then, the cash shortage was a creation of government policy; this time public nervousness could overwhelm authorities already grappling with the nation’s biggest banking scam, hidden bad loans and allegations of impropriety.

“The country is moving to a very risky scenario as this cash crunch erodes faith in the banking system,” said C.H. Venkatachalam, general secretary of the All India Bank Employees’ Association, which represents about 1 million bank employees. “If the situation continues for another week we fear for the safety of bank employees” in affected states, he said. 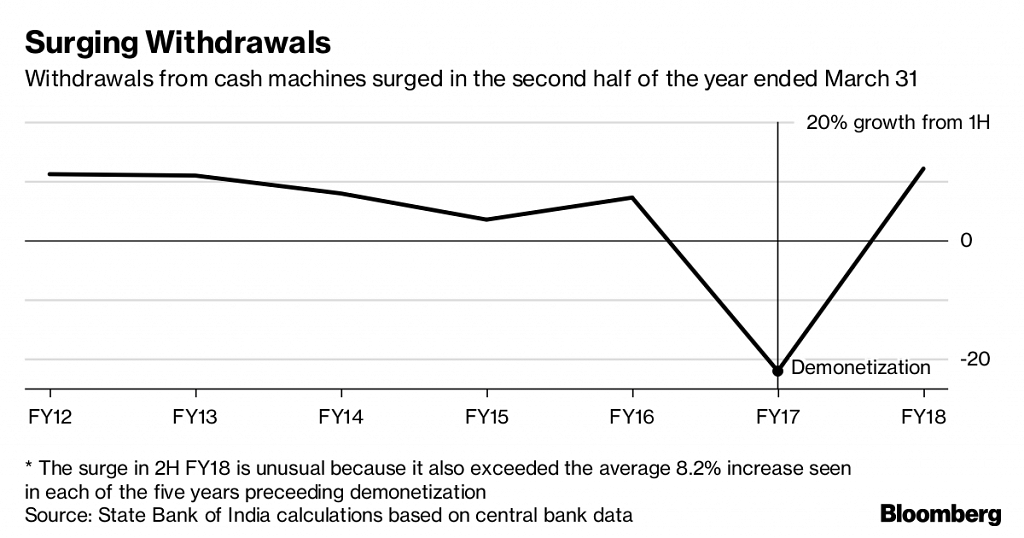 Venkatachalam said Indians are concerned that a proposed bill, which gives regulators the option to use public deposits to bail out a bank that goes bust, is pushing individuals to hoard cash. While the government has repeatedly issued statements to assure the public that their money would be safe, concerns linger, he said.

These concerns are heightened by news that emerged in February of a $2 billion fraud at state-run Punjab National Bank, where a jeweler allegedly colluded with a bank employee to siphon off money before leaving the country.

“Trust in the banking system has hit an all time low,” said Kranthi Bathini, director of Mumbai-based financial advisory company WealthMills Securities Pvt., who tried about 15 cash machines across 250 kilometers of a highway while traveling in the southern state of Andhra Pradesh last month, but all were dry.

India’s Bankex index fell 0.4 percent as of 2:27 p.m. in Mumbai on Wednesday, the first drop in five days, while the main equity index rose 0.1 percent.

The bedrock of the issue is that authorities haven’t been able to replenish cash lost as a result of Modi’s 2016 ban. As a share of the economy, cash in circulation is about 11 percent, lower than 12 percent before the demonetization drive.

What the RBI’s saying:

“It is clarified at the outset that there is sufficient cash in the RBI vaults and currency chests. Nevertheless, printing of the notes has been ramped up in all the 4 note presses.“The shortage may be felt in some pockets largely due to logistical issues of replenishing ATMs frequently and the recalibration of ATMs being still underway. RBI is closely monitoring both these aspects.“Further, as a matter of abundant precaution, RBI is also taking steps to move currency to areas which are witnessing unusually large cash withdrawals.”– Reserve Bank of India statement, issued late on Tuesday

Another reason for the cash shortage is that payments to farmers have gone up during the ongoing crop-purchase season, Rajnish Kumar, chairman of State Bank of India, the country’s largest lender, told ANI. “In the next week, things will start coming back to normalcy,” he said.

There’s also speculation that looming elections in some Indian states are triggering the crunch. Money for votes is a common practice in India, as well as spending in cash for legitimate expenses such as paying people for door-to-door campaigns.

Modi’s opposition isn’t wasting any time in attacking his administration.

“Now you understand the deception that was demonetization, that terror is back,” Rahul Gandhi, who may well be Modi’s main competitor for the prime minister’s post come 2019, wrote in a Hindi rhyme on Twitter. “Our cash machines are empty once again, and look at the state of our banks.”