In his address to all the heads of missions, and other trade and commerce stakeholders, Modi pushed for greater integration between missions abroad and Indian exporters and manufacturers.

The message came a month after the Ministry of Commerce and Industry set an export target of $400 billion for the current fiscal year. During April-July this year, exports had risen to $130.56 billion against $75.10 billion in the same period last year.

To this end, Modi said the government has taken a “big decision” for exporters under which they will get a boost of about Rs 88,000 crore in the form of insurance cover.

The PM also said it is imperative to rationalise export incentives, to make Indian exports compliant with global trading rules under the World Trade Organisation (WTO).

Also read: As Indians step out to shop, holiday, petrol demand looks at a V-shaped recovery

According to PM Modi, the decision to do away with retrospective tax was indicative of “consistency” in the government’s policies.

“Our exporters doing business in different countries of the world know very well how big the impact of stability is. The decision taken by India to get rid of retrospective taxation shows our commitment, shows consistency in policies,” he said.

Under the retrospective tax framework, introduced in 2012 by the UPA government, transactions involving sale or transfer of shares that took place outside the country, but where the underlying assets are located in India, were subject to tax.

Invoking “Brand India”, Modi said it is “time for a new journey with new goals”. “This is the time for us to establish a new identity of quality and reliability. We have to try that there is a natural demand for high value-added products of India in every nook and corner of the world,” he said.

According to the PM, there are four major factors that can boost merchandise exports from India — manufacturing, transport and logistics, government’s support, and exploring international markets.

“At present our exports are about 20 per cent of GDP. Considering the size of our economy, our potential, the base of our manufacturing and service industry, it has the potential to grow a lot,” he said. 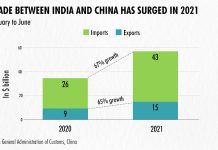