In the backdrop of the ongoing tensions between India and China at the Line of Actual Control in Ladakh, the UK is also planning to operate HMS Queen Elizabeth Carrier Strike Group in the Indo-Pacific region next year, said Dominic Raab, the UK’s Foreign Secretary, on a three-day visit to India.

“I think you can expect the UK to be more active and energetic, in particular, we have been talking about this Indo-Pacific tilt,” he said at a press conference after the meeting.

“Certainly, if you look at shared interests and shared values and put it all together from maritime security, vulnerability of supply chains, the opportunities to really shift the dial on climate change… We see this as top priority.”

The foreign secretary also said the UK would come out with a strategic review by early next year that will spell out its approach towards the concept of Indo-Pacific, in which India will feature prominently as a partner. He added the Indo-Pacific region holds economic potential for a period of 20-30 years.

Indo-Pacific an articulation of globalisation

Jaishankar expressed India’s satisfaction with the growing recognition and acceptance of the idea of Indo-Pacific.

“We’ve seen this today with the UK, Netherlands, Germany, France, with the EU… I welcome the greater interest and attention that the UK is devoting to the Indo-Pacific, and we certainly look forward to working with you in different manifestations,” the minister said.

Jaishankar added that there will be political and security aspects to this acceptance of the Indo-Pacific in Europe, as there were many other aspects with the ASEAN, Japan, Australia and the US. But he said “I dare say there’d be more”, hinting that other European countries will also come forward to support it.

France, Germany, and the Netherlands came out with their own version of the Indo-Pacific policy last month as China continues to pose a challenge to these countries as it begins to assert its power.

Jaishankar said for India, the concept of Indo-Pacific is an articulation of globalisation.

“The Indo-Pacific is a reality. At the end of the day, it’s an articulation of globalisation. The fact (is) you can’t deal with different theatres in a water-tight way and the kind of challenges the world faces today require a larger arena and more coordinated efforts,” he said.

Jaishankar added that in the meeting, he and Raab reviewed the state of the world, including the situation in Afghanistan, the evolution of the Indo-Pacific, and developments in the Middle East.

India and the UK also agreed on a 10-year roadmap and discussed how to “take their ties forward” in a post-Brexit era.

Raab also confirmed that UK Prime Minister Boris Johnson will accept his Indian counterpart Narendra Modi’s invitation to be the chief guest at next month’s Republic Day celebrations. Johnson has also invited Modi to the UK to represent India as a guest country at the G-7 Summit next year.

On the proposed trade agreement between the UK and India, Raab said: “The UK and India have an invaluable and indispensable partnership, and we look forward to strengthening it in the years ahead. Together, we can deliver an ‘Enhanced Trade Partnership’ next year, combine our cyber security expertise to protect our citizens, and join forces to protect global health and promote things like vaccine production.” 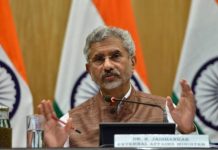