New Delhi: India and China are not in a nuclear arms race and both countries had different objectives for acquiring nuclear weapons, External Affairs Minister S. Jaishankar said Thursday in Moscow.

“I don’t believe that there’s a nuclear arms race between India and China. If you look at the points of time when India and China became nuclear weapon powers, China became in 1964, India became in 1998… The Chinese decision to make nuclear weapons was primarily focused on the US and then the Soviet Union. I would say both the history, the scale and the nature of the Chinese programme, therefore, is much more linked to the US and Russia,” the minister said while addressing a think tank in Moscow.

India, he said, exercises “nuclear option saying upfront that we would be aiming only for a minimum deterrent”.

“Actually, there were very few countries who actually said that. The only other country which hinted at that when they made nuclear weapons was France. Even France was not so explicit as we were,” he added.

“I think the evolution of the Chinese programme has a much larger dynamic than us,” he added.

Also Read: China unlikely to give up LAC ‘gains’, ties with India to only deteriorate: Ex-envoy Bambawale

Through his address, Jaishankar discussed India and China’s relationship over the years, including the strains of the past year on account of the Ladakh standoff.

According to Jaishankar, India and China had a “very stable” relationship for the last 40 years despite challenges. But the past year has given rise to a “lot of concerns” owing to the Ladakh border standoff and the June 2020 Galwan Valley clash in which India lost 20 soldiers, he said.

“For the last one year, there has been a lot of concern about the relationship because China has not observed agreements that it had signed up to when it came to our border. After 45 years, we actually had a border incident with casualties, and peace and tranquility on the border for any country is a foundation of a relationship with a neighbour. So, naturally, the foundation has got disturbed and so has the relationship,” he said.

Apart from the border, the minister added, India and China have a lot of other outstanding issues.

Russia a ‘major partner’ for India in Indo-Pacific

During his speech, Jaishankar once again pitched for Russia’s participation in the Indo-Pacific strategic construct — something Moscow dismisses as a US-led anti-China framework.

“Both our interests and our reach today extend well into the Pacific. Our major partners are located there, and indeed, cooperation with the Russian Far East is one notable example.  The reality is that there is a vast global commons whose safety, security, ecology, environment and activities are increasingly a shared responsibility,” he said.

“For those who wish to better understand our thinking, I would refer them to the Indo-Pacific Oceans Initiative that Prime Minister Modi announced at the East Asia Summit in 2019.”

Jaishankar said India and Russia will soon be holding a 2+2 dialogue mechanism, which was agreed to by Prime Minister Narendra Modi and President Vladimir Putin in April. This, he added, will “provide a new vitality” to bilateral ties.

He also said Russia has always been a “dependable defence partner of India”. This aspect of bilateral ties, he added, is needed “to be accompanied by a greater focus on military-to-military ties, including in the maritime domain”.

Jaishankar, who arrived in Russia Wednesday, will be meeting his Russian counterpart Sergey Lavrov Friday, the final day of his visit to the country.

Also Read: What does the future of India-China ties look like? 8 experts speak 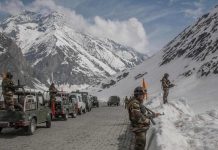 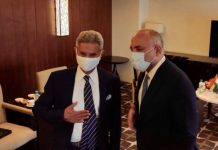 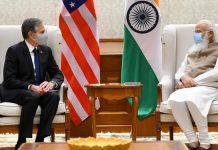